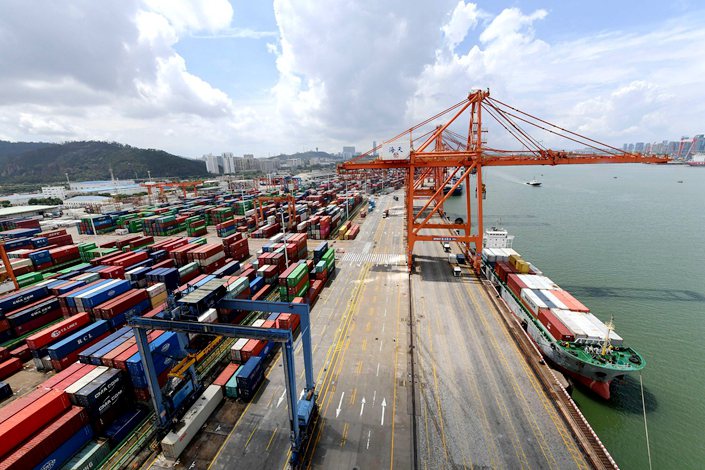 China’s goods exports grew at the highest rate in 17 months in August, boosted by recovering overseas demand and a surge in shipments of medical supplies to countries battling Covid-19, while imports declined for a second straight month, official data showed.

Exports rose 9.5% (link in Chinese) year-on-year to $235.3 billion last month, accelerating from July’s 7.2% growth rate. It was the fastest expansion since March 2019, according to data released Monday by the General Administration of Customs. The reading was higher than the median forecast for 6% growth in a Caixin survey of economists (link in Chinese).

The performance was partly driven by exports of medical equipment, which grew 38.9% (link in Chinese) year-on-year in dollar terms in August. The rate was much slower than a 78% increase the previous month, but was still faster than average. Also, shipments of textiles, including masks, rose 47% last month, marking the fifth straight month of double-digit growth, though the pace was slightly lower than July’s rate.

Louis Kuijs, head of Asia economics at research firm Oxford Economics Ltd., said they expected export growth to remain robust for the rest of the year as the global economy recovers. “We anticipate a record-breaking surge of global growth on the quarter in Q3 due to eased lockdown restrictions, followed by solid, albeit slower, growth in Q4,” he said in a Monday note.

Still, Kuijs warned that the export outlook remains challenged by the fact that several other major economies have not yet contained their Covid-19 outbreaks.

In addition, Monday’s data showed that China’s imports dropped 2.1% year-on-year in August to $176.3 billion, steeper than a 1.4% decline the previous month. The reading came in below the Caixin survey’s median forecast of 0.8% growth.

China’s economy has continued to improve in the wake of the domestic epidemic, but the recovery may be less strong than before, some economists said.

Oxford Economics said it lowered its projection for year-on-year fourth-quarter economic growth to 2.3% from 2.5%, as several other major economies continue to struggle with their coronavirus epidemics and as Chinese stimulus measures lose some of their punch.