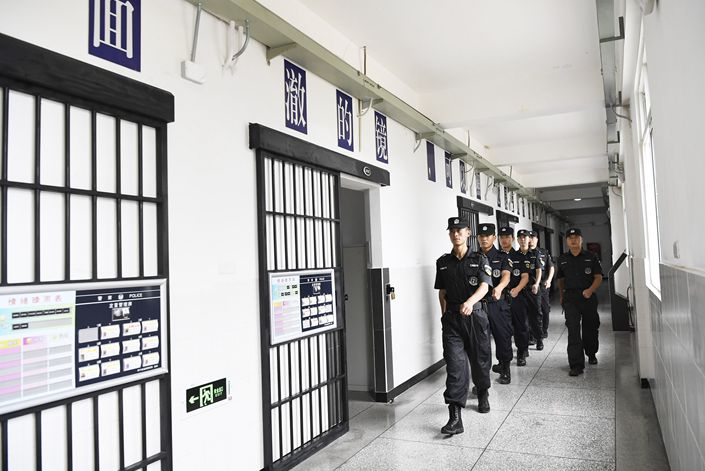 The killer, surnamed Wang, was a hired hit man sentenced to 15 years’ imprisonment in 2005 for murdering a teacher in return for 200,000 yuan.

Another incidence of a convicted murderer using medical parole to abscond from prison has come to light in North China’s Inner Mongolia autonomous region, days after a similar case sparked an outcry over criminals serving so-called “on-paper sentences.”

The killer, referred to only by the surname Wang in legal documents, was a hired hit man sentenced to 15 years’ imprisonment in 2005 for murdering a teacher in the regional capital Hohhot in return for 200,000 yuan ($29,242). Lawyers subsequently told Caixin the man is Wang Yunhong, whose case was widely covered in the Chinese media that year.

Wang, who is in his mid-40s and hails from East China’s Shandong province, conspired with prison hospital officials to secure a series of medical paroles allowing him to spend more than seven years outside jail, during which time he worked, traveled and started a family. He returned to prison last year.

The case bears striking similarities to that of Batumenghe, who was sentenced to 15 years behind bars in 1993 for killing his former schoolmate but immediately received medical leave and never spent a day incarcerated. He was recaptured in 2017 and imprisoned a year later.

On the night of Sept. 3, 2001, Wang lured Wu Zheng, a teacher formerly employed at a private technical college in Hohhot, into his off-road vehicle, killed him, and buried his body under soil and leaves, according to contemporary reports by Chinese state news agency Xinhua.

A court later found that college director Zhang Mingde had paid Wang 200,000 yuan to “do in” Wu and another teacher, Liu Zhiguo, who had both left the college earlier that year after a dispute but continued to hold classes under the school’s name. Liu’s murder was never carried out.

Wang evaded justice until 2004, when he was seized by police in the southwestern city of Lijiang. The following year, a Hohhot court found him and Zhang guilty of intentional homicide and sentenced them to death with a two-year reprieve and lifelong deprivation of their political rights, as well as ordering them to pay legal costs of 283,000 yuan.

A court document shows (link in Chinese) the verdict was upheld on appeal but Wang’s sentence was subsequently commuted twice, most recently in March 2011 when it was reduced to 15 years’ imprisonment and four years without political rights.

Wang did not return to jail after that period, despite making a partial recovery, the court document shows. Instead, his parole was renewed six more times before he secured temporary release in 2015. He cumulatively spent more than seven years of his sentence outside prison between 2011 and 2019, working, travelling, marrying and starting a family.

Investigators subsequently found that five officials at a hospital affiliated with Wang’s prison “practiced favoritism” toward Wang to exaggerate his health complaints and help him secure medical parole that “failed to accord with statutory conditions,” according to the court document.

Wang returned to prison in June 2019. Four months later, a Hohhot court ruled that Wang had obtained parole illegally and added the time he had spent on the outside — a total of seven years, one month and 20 days — onto his prison sentence.

In April this year, a court in the Inner Mongolian city of Tongliao found the five hospital officials guilty of negligence and abuse of power and handed down sentences ranging from three to five and a half years. The sentences were upheld on appeal.

Wang’s case is the second in a week to showcase how some criminals in China exploit corruption networks and administrative shortcomings to avoid incarceration — a phenomenon known as serving sentences “on paper.”

On Sunday, Inner Mongolian authorities announced they had launched an investigation into Batumenghe, another convicted murderer who spent his entire 15-year sentence on medical parole and later embezzled 282,000 yuan while working as a village chief in Chen Barag Banner, a county-level jurisdiction.

An expansive region of resource-rich grasslands, Inner Mongolia has been the site of a string of corruption scandals this year. In June, a former high-ranking provincial commerce official was sentenced to 17 years for bribe-taking and embezzlement, and Hohhot’s Communist Party chief was detained on unspecified corruption suspicions.