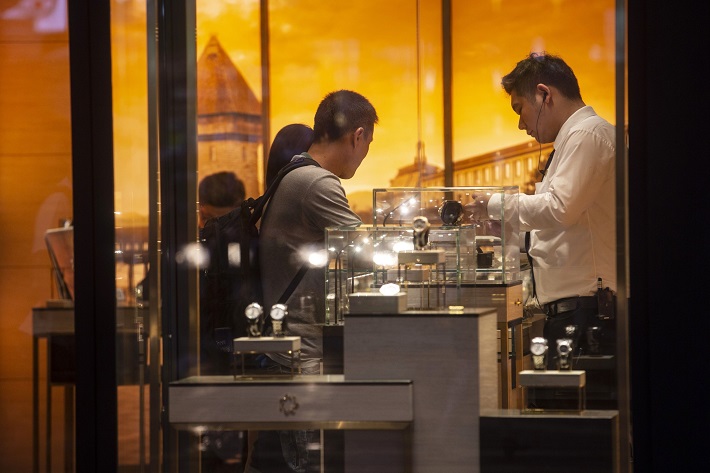 Shoppers browse watches on display inside a store in the Causeway Bay district of Hong Kong. Photo: Bloomberg

(Bloomberg) — Luxury watch-maker Officine Panerai-Firenze SA is famed for its big and bulky World War II-era wrist pieces. But its best sellers are now becoming smaller and smaller, largely due to the might of Chinese buyers.

Though its original military watches had dials stretching 60 millimeters, the Swiss brand now sells models as small as 38 millimeters in China, due to the local preference for more discreet products.

The watchmaker’s pivot is an example of how luxury good makers are retooling themselves to suit Chinese tastes. This process is being accelerated by the Asian nation’s rebound as the rest of the world still reels from the economic devastation of the coronavirus pandemic.

“China, for the first time in the history of the brand, will become our No.1 country this year,” said Jean-Marc Pontroué, chief executive officer of Panerai, a unit of Swiss luxury group Richemont SA. “Now that we have a clear view of how big China is for the brand, how much even bigger it could be in the future, we know where to focus our investments.”

China, where the novel pathogen first emerged, has become a lifeline for the luxury industry amid Covid-19. Driven by pent-up desire to spend after months of social distancing and unable to travel overseas, Chinese consumers are splurging at home. Luxury demand on the mainland may surge 10% this year, even as it plunges 45% globally, Boston Consulting Group estimated in June.

Louis Vitton held its latest men’s show first in Shanghai in August. The annual international watch fair for Richemont brands — an elite industry event hosted usually in Geneva — was brought for the first time to Shanghai this week. In April, the Geneva fair was replaced by an online version.

Brands such as Louis Vuitton, Givenchy and Chloe have also started using live-streaming to push products in China — a popular style of social commerce where an influencer speaks live, promoting and trying out items.

LVMH’s China sales last quarter rose more than 65% from a year ago while the overall revenue for the wine-to-watches luxury group dropped 38%. Estee Lauder Cos Inc.’s sales in mainland China jumped 60% while Kering SA saw over 40% rise in sales after a hit in the first quarter.

“I believe the China market is big enough to justify any product adaptation,” Yu said. “A one-size-fits-all approach is less likely to succeed.”

Beyond shrinking its watch dials, Panerai plans to add eight new stores by March to beef up its presence beyond the megacities of Beijing and Shanghai. It currently has 57 stores in China, accounting for about 40% of its global network.

It’ll open two stores in Hainan in the next two months after its first pop-up store achieved “exceptional” success, Pontroué said. China recently expanded its tax-free rules in the island of Hainan.

Opened in June, the foot traffic at Hainan’s pop-up store is almost double of the pre-Covid level seen in its flagship Hong Kong store — the company’s largest boutique by space. Hainan is making up about 30%-50% of Panerai’s lost Hong Kong sales, he said.

“It’s a very good laboratory to test new ideas,” Pontroué said. “Having China as our prime target is also a very good parameter to see if the new concept is a potential success or not.”