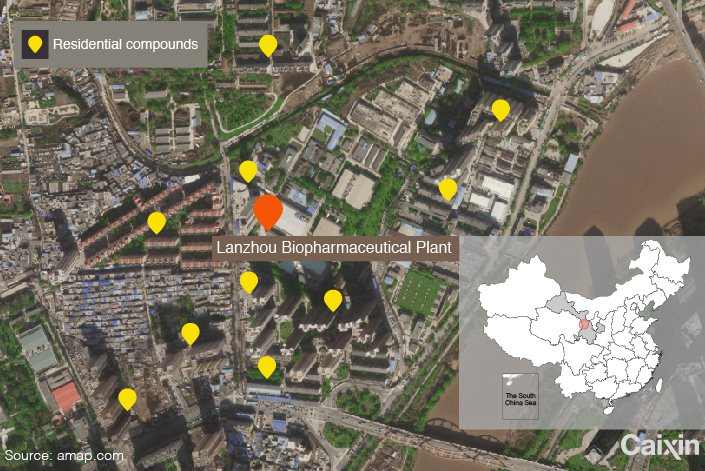 There are more than 10 residential communities with a combined population of more than 10,000 located within 1 kilometer of the biopharmaceutical plant.

The Lanzhou Health Commission has confirmed that 3,245 patients have been infected with brucellosis, marking the first time this year that the capital of Northwest China’s Gansu province has issued an official tally about the outbreak of the highly contagious disease, which occurred in November.

The disclosure came a day after a Caixin report on Monday exposed the local government’s lack of both disclosure and formal diagnosis caused thousands of patients to miss the window for receiving the most effective treatment for the disease.

The local health authority reported 3,245 confirmed brucellosis infections (link in Chinese) out of 4,646 suspected cases of people who tested positive of brucellosis antibodies as of Monday, according to a statement released the next day.

The Lanzhou Biopharmaceutical Plant, which leaked the brecellosis bacteria due to failed disinfection measures and subsequently caused the outbreak, will begin compensating infected patients starting next month, the statement said.

The statement did not offer details of the compensation, nor the condition of patients receiving medical treatment.

On Tuesday, the state-owned China Animal Husbandry Industry Co. Ltd, which owns the plant, saw its market capitalization fall by 1.68 billion yuan ($248 million) in a single day after its Shanghai-listed shares plunged nearly 10%.

Brucellosis is a highly contagious bacterial disease also known as Malta fever or Mediterranean fever, which humans can get from contact with infected animals or animal products. There’s no evidence that the disease can spread from human to human.

The disease can cause recurring fevers, joint pain, and severe headaches, among other symptoms. Chronic brucellosis is especially hard to cure and can cause listlessness and a persistent feverish state in patients. The symptoms can last for months or even years, though the disease is rarely deadly.

After the outbreak, local authorities launched an investigation and said it was caused by the Lanzhou plant using expired sanitizers while producing Brucella vaccines between July 24 and Aug. 20, which resulted in the bacteria entering the factory’s exhaust and infecting staff members and students at the nearby Lanzhou Veterinary Research Institute.

Before Tuesday’s disclosure, local authorities confirmed in late December that only 203 individuals had tested positive on brucellosis antibodies after testing about 4,000 people.

But a Caixin investigation found that the scale of the outbreak went far beyond what authorities had disclosed.

By the end of February, more than 3,000 people tested positive for brucellosis antibodies covering almost all age groups, including 213 from the Veterinary Research Institute, eight from the Lanzhou Biopharmaceutical Plant, more than 2,500 residents of nearby residential complexes and more than 150 people from more distant areas.

The report said the lack of formal diagnosis caused thousands of infected patients to miss the window for the most effective treatment, leaving them with a hard-to-cure chronic condition that requires long-term medication.

Patients said doctors seemed inexplicably reluctant to issue a brucellosis diagnosis or to order aggressive treatment. Although local officials maintained that those infected would recover by themselves over time, many residents are still suffering medical conditions that have undermined their quality of life.