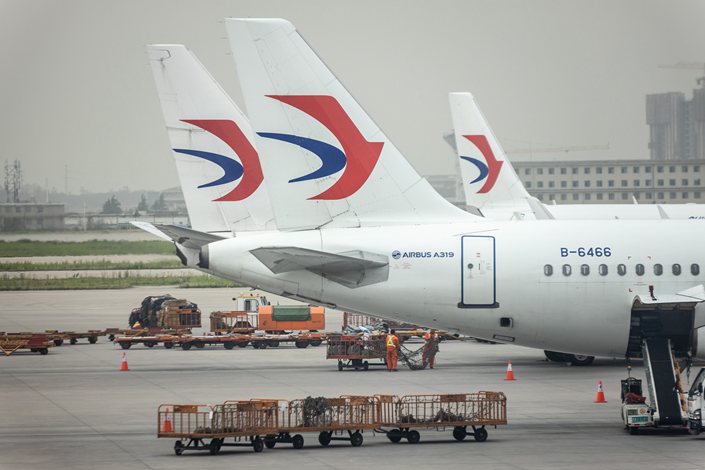 Under a CAAC policy announced in June, the occurrence of more than five cases appearing on the same flight is supposed to trigger a “circuit breaker” that forces an airline to suspend the route for a week.

A China Eastern Airlines Co. Ltd. route from the Philippines is the latest to fall afoul of strict rules from China’s civil aviation regulator that penalize airlines found to have flown in people with Covid-19.

The Shanghai-based airline announced Friday that it had suspended its MU211 and MU212 flights until further notice to control the epidemic, according to a post on its WeChat account.

The Civil Aviation Administration of China (CAAC) said it would suspend MU212 after eight people on a Sept. 9 flight tested positive for Covid-19, the Shanghai government’s press office said in a WeChat post on Monday (link in Chinese). The Shanghai-based carrier appears to have preempted the weeklong CAAC suspension, which was to begin on Sept. 28, according to the post.

Under a CAAC policy announced in June, the occurrence of more than five cases appearing on the same flight is supposed to trigger a “circuit breaker” that forces an airline to suspend the flight for a week.

China has moved to ease restrictions on international flights to reboot global travel. Under the June rules, airlines were allowed to resume international routes into China starting with one flight a week.

In a Sept. 1 statement (link in Chinese), the CAAC said that 31 flights had triggered this “circuit breaker” and 52 flights had been canceled under the rules.

In a move to boost domestic travel ahead of the National Day holiday, which starts Oct. 1, the CAAC last week eased restrictions (link in Chinese) on domestic flights by lifting the cap on weekly flights that are subject to approval, giving domestic airlines more flexibility to schedule flights at airports such as Beijing, Shanghai and the southern city of Guangzhou.

“China’s aviation industry is on track for a stable recovery,” Zhang Qing, a deputy head of the CAAC’s development planning department, said at a briefing (link in Chinese) Tuesday.

In August, air passengers in China took 45.5 million domestic and international trips — about three-fourths as many as in the same period last year, according to CAAC data (link in Chinese).

However, the vast majority of those trips were domestic. Air passengers in China made just 189,000 international trips last month, down 97.3% from the same period in 2019.

Since the beginning of August, there have been more than 13,000 domestic and international flights each day in China, about 80% of the number in the same period last year, the regulator said.