End of ‘Made in Hong Kong’ Brand Expected to Hurt Businesses, but Not Trade

By Liu Yanfei and Timmy Shen 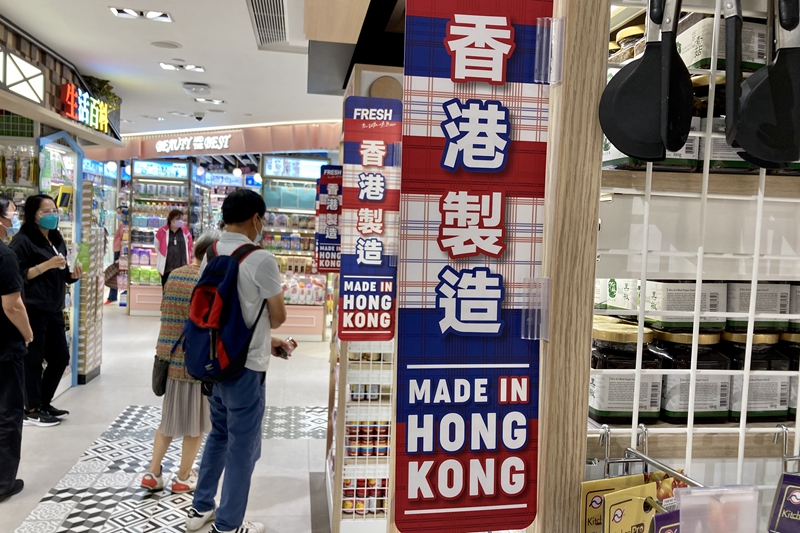 New labeling rule mandates goods exported to the U.S. from Hong Kong must be designated as ‘Made in China.’ Photo: Liu Yanfei/Caixin

Washington’s decision to begin labeling Hong Kong goods exported to the U.S. as “Made in China” in November could deal a blow to the city’s brands, and have raised concern among businesses. But the move may have little impact on overall trade, given how few goods Hong Kong actually makes and ships to the U.S.

The U.S. Customs and Border Protection (CBP) on Aug. 11 published a notice that Hong Kong imported goods will no longer be allowed to indicate “Hong Kong” as their origin and must be marked to indicate “China,” as part of President Donald Trump’s executive order suspending the special treatment Hong Kong enjoyed under the United States-Hong Kong Policy Act of 1992.

Nonetheless, the CBP pointed out the new labeling will not affect country of origin determinations for purposes of assessing ordinary duties under the Harmonized Tariff Schedule of the United States, and that goods that are products of Hong Kong should continue to report “HK” as the country of origin when required.

The labeling rule was set to take effect on Sept. 25 but was later postponed to Nov. 9, which falls six days after the U.S. presidential election.

The move quickly stirred controversy in Hong Kong as the city often takes pride in its long history of “Made-in-Hong Kong” brands. The Hong Kong special administrative region government has repeatedly stated that it opposed the rule.

Hong Kong’s Secretary for Commerce and Economic Development, Edward Yau Tang-Wah, said at an August briefing that the labeling of “Made in China” is a distortion of facts and is not in line with the World Trade Organization’s instructions, undermining Hong Kong’s status as a separate customs territory.

Concerns have also emerged among businesses in Hong Kong surrounding the branding image of made-in-Hong Kong products, which some locals worry could become limp and worn as time passes and eventually be forgotten.

Simon Wong, chairman of food and beverage group Kampery Development Ltd. and chair of the Hong Kong Brand Development Council, said that Kampery has many food plants outside Hong Kong and only about 10% of its products are produced in Hong Kong. Its U.S. sales only account for about 5% of its total sales value, he said.

“We’re still keeping some production in Hong Kong because some clients from other countries don’t want products made on the Chinese mainland,” Wong said, adding that food safety was once an issue on the mainland and that overseas importers tend to have more confidence in products made in Hong Kong.

Billy Mak, an associate professor of the department of finance and decision sciences at Hong Kong Baptist University, said that consumers tend to be more willing to accept higher pricing for products made in Hong Kong as opposed to those made on the mainland, and that it remains a question if consumers would be willing to respond the same for products that are not labeled as such.

In July, the largest value of exported goods shipped to the U.S. fell under the categories of telecommunications, sound recording, office machines and automatic data processing machines, according to official data.

Michael McCool, Hong Kong-based managing director of U.S. consulting firm AlixPartners, told Caixin in an email that the new labeling rule will “in the overall scheme of things have a barely noticeable impact.”

McCool said that while the figures for exports from Hong Kong to the U.S. look, on first inspection, to be large, this obscures the fact they are almost all “re-exports.” In 2019, Hong Kong’s total clothing exports were $12.3 billion, of which $10.4 billion were re-exports of products made on the Chinese mainland and $3.4 billion were being exported to the U.S., he said, citing data from the Hong Kong Trade Development Council.

“Other sectors where Hong Kong has material exports are mainly business to business sectors such as electro-mechanical systems where the country of origin is a less emotional factor in the purchase decision than it is in consumer products, so there will most likely be no noticeable impact there either,” McCool said.

However, small enterprises that do manufacture and export to the U.S. might see their sales reduce due to the loss of the “Made in Hong Kong” designation, McCool said. “The owners and staff of these businesses could find it tough going. But it would not make a noticeable difference to the Hong Kong-U.S. trade figures,” he said.

Mak, Hong Kong Baptist University’s professor, said the rule will take effect after the U.S. presidential election so there is still some uncertainty about it. He said that businesses that will feel the pain could either rearrange their U.S. business to other markets or shift their production from Hong Kong to other places to prevent risks that the new rule might bring about.

“Our future U.S. market strategy will be to promote the brand of Hong Kong with products that aren’t necessarily made in Hong Kong,” Wong said.