By Chen Xuewan and Anniek Bao 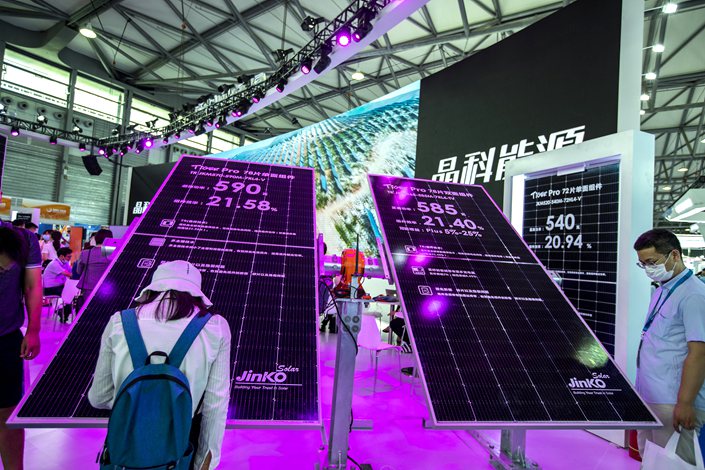 While many major Chinese solar panel firms have delisted from the U.S. in recent years, JinkoSolar is looking to stay in New York while listing a subsidiary on China’s STAR Market.

JinkoSolar Holding Co. Ltd., a major solar-panel manufacturer, has announced plans to list one of its subsidiaries on Shanghai’s Nasdaq-style STAR Market.

New York-listed JinkoSolar hopes to debut the wholly owned Jiangxi Jinko PV Material Co. Ltd. on the tech-focused bourse within the next three years, and the company’s board has given the plan the green light, JinkoSolar said in a statement on Monday.

JinkoSolar’s stock surged more than 12% on Monday in response to the news.

“Listing Jiangxi Jinko on the STAR Market will enable it to access a new source of growth capital,” CEO Cheng Kangping said in the statement, stressing that the domestic listing will “raise our profile with investors both in China and globally.”

As state subsidies have gradually been rolled back, China’s solar industry has been consolidating around big players like JinkoSolar and its domestic rival JA Solar Technology Co. Ltd. The 10 biggest photovoltaic producers by output now account for three-quarters of the country’s total solar cell production.

The coronavirus pandemic has failed to significantly dent the solar giants’ growth, according to figures released by the China Photovoltaic Industry Association in July.

In the first quarter, JinkoSolar posted profits of 296 million yuan ($43.6 million), seven times more than in the same period last year, on 8.48 billion yuan of revenue, a figure that was up 45.7% year-on-year. It delivered 3.4 gigawatts worth of solar panels in the first quarter, a 12.3% increase, and announced plans to expand production capacity by 56% this year.

However the Covid-19 pandemic has depressed overseas demand for Chinese panels, with exports shrinking 10.1% in the first half of the year to $7.9 billion. The European market remained the largest source of demand, receiving 40% of China’s photovoltaic exports.

To raise capital for its subsidiary and meet the STAR Market’s listing requirements, JinkoSolar plans to sell 26.7% of Jiangxi Jinko’s shares for 3.1 billion yuan. The sale, which is expected to be completed by October, will see the shares purchased by JinkoSolar’s founders, senior management and third-party institutional investors.

Several Chinese solar firms have delisted abroad in exchange for a domestic IPO, including JA Solar Technology, which left the Nasdaq in 2018 in order to list on the Shenzhen bourse, and Trina Solar Ltd. which listed on the STAR Market in June after leaving the New York Stock Exchange in 2017.

However, opting to spin off a subsidiary for a domestic listing may be far quicker, and offer the parent company more ways to raise cash. An analyst at Roth Capital raised the price target for JinkoSolar from $22 to $29 in the wake of the spin-off news and suggested that listing Jiangxi Jinko in Shanghai would create more low-cost fundraising opportunities for JinkoSolar.