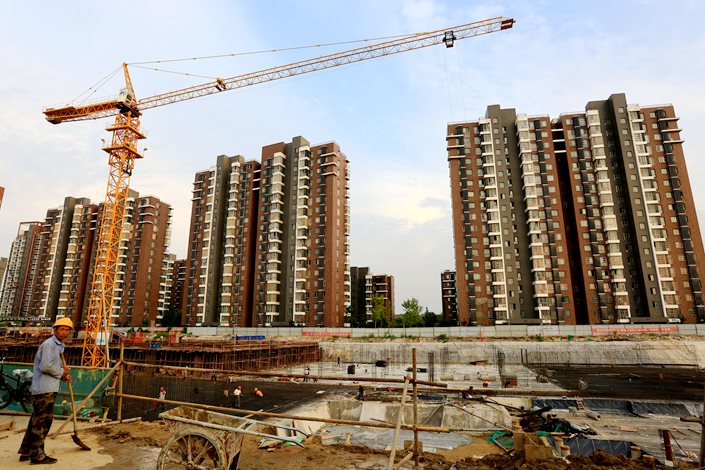 A residential building under construction along the Dayun River in Huai'an, East China's Jiangsu province, on Sept. 1.

Local governments in China will have to invest more of their profits from land sales into agricultural and rural areas as policymakers seek to close the country’s rural-urban gap.

By the end of 2025, more than half of the profits (link in Chinese) that local governments make from transferring land use rights will go into agricultural and rural areas, as part of the country’s ongoing “rural revitalization campaign,” according to guidelines released on Wednesday by the central committee of the Communist Party and the State Council, China’s cabinet.

Selling land is a major source of revenue for local governments. Because all land in China is state-owned or collectively owned, local governments don’t actually sell the land, but rather the land use rights for a certain period. In exchange they receive a fee.

Last year, local governments took in nearly 7.3 trillion yuan ($1.1 trillion) in revenue from such fees, a year-on-year increase of 11% and equivalent to nearly a half of the tax revenue across the country, according to data from the Ministry of Finance (link in Chinese).

However, the majority of land transfer revenues have long been used for urban and industrial development, leaving a smaller share earmarked for agricultural and rural development, Han Jun, a vice agriculture minister, said at a news conference (link in Chinese) on Thursday. That has led to a shortfall of investment in the countryside, he said.

From 2013 to 2018, local governments in China raised about 28 trillion yuan through land sales. About one-fifth of that, or 5.4 trillion yuan, was profit after expenses such as compensating the original land rights holders, official data showed. About one-third of that profit, or 1.85 trillion yuan, was spent on the agriculture sector and rural areas during the six-year period.

At the end of 2019, China’s permanent urban residents accounted for over 60% (link in Chinese) of its total population. As urbanization accelerates, it’s now time for urban areas to support the development of rural ones, Han said.

The first priority for those funds is to make up for “shortfalls in rural development” by improving rural residents’ living environment and education, among other projects, he said.

The guidelines also listed several exceptions, such as the megacities of Beijing and Shanghai where land sales revenue is high, but there is less demand than in other parts of the country for investment in agricultural and rural areas. Local governments there can decide at their own discretion by how much to raise the share of land transfer income that goes to these areas, the guidelines said.