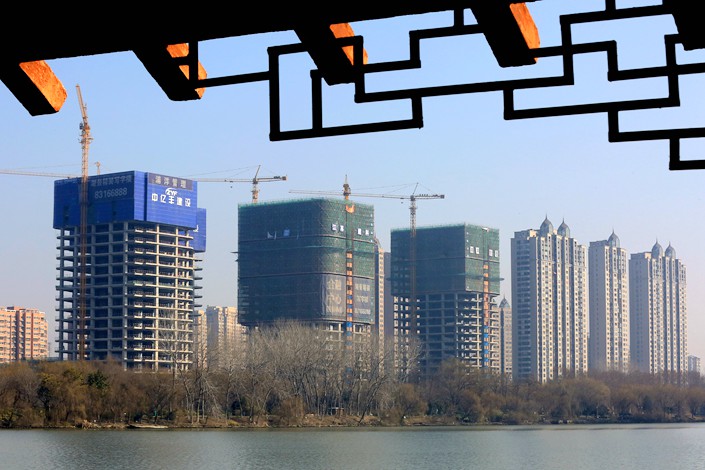 Any prolonged and significant negative impact on the real-estate market threatens to dent not only local economic growth but also local government income and consumption. Photo: VCG

Offering discounts to shift unsold homes is nothing new in China’s real-estate industry. But property giant China Evergrande Group’s announcement this week that it would slash prices on new apartments in 613 developments underscores the depth of the crisis that’s engulfed the industry as the coronavirus epidemic has brought large swathes of the economy to a halt.

For the last three weeks, developers across the country have seen home transactions slump to virtually zero after they closed down their sales offices as part of the government’s campaign to prevent the spread of the virus which has killed 2,236 people and infected 75,465 on the mainland as of Feb. 21. The China Real Estate Association issued a notice (link in Chinese ) on Jan. 26 urging the shutdown and many provinces, including Hunan, Jiangxi, Guangdong, Hainan and Heilongjiang, have instructed developers to suspend or reduce sales activities involving human-to-human contact, effectively forcing them to shutter their brick-and-mortar operations.

“I’ve been in real-estate marketing for 20 years and I’ve never seen anything like it. Sales offices were closed literally overnight,” Ke Min, founder of Hainan Youjia Zhixuan, a property sales agency based in the southern island province of Hainan, told Caixin.

China Real Estate Information Corp. (CRIC), a property consultancy and data provider, said in a Feb. 14 report that local governments in more than 100 cities instructed property firms to shut their sales offices. Over the weeklong Lunar New Year public holiday that originally ran from Jan. 24 to Jan. 30, more than 90 cities had no new properties for sale, 24 had no transactions, and overall, sales slumped by 93% from the previous week. In the first week of February, there wasn’t a single transaction in 27 of the cities and total sales dropped 95% compared with the first week following the Lunar New Year holiday in 2019, it said.

The Lunar New Year is usually an important selling opportunity for property developers, especially in third- and fourth-tier cities, as millions of people making their annual trip home for the holiday make purchases. But the coronavirus epidemic has upended the tradition this year.

One marketing executive with a major property firm told Caixin that it usually keeps one-third of its sales team working over the holiday period, but this year it cut back significantly and then sent them all home after the China Real Estate Association issued its notice.

Some developers have tried to bolster sales by turning to online marketing, promoting new developments through WeChat accounts, mini programs and websites, and offering virtual tours. But so far, they’ve had little success, as few buyers are prepared to put down a deposit without physically visiting the site.

Even if the coronavirus outbreak ends by the beginning of March, real-estate sales are likely to plummet by 79% year-on-year in February and 43% in March, property services provider Savills PLC predicted on Monday. But if the epidemic lasts well into March, the slump that month could deepen to 69%, it said.

Without sales, many developers, especially small private companies with weak balance sheets and no access to bank loans could go out of business. Funds raised from deposits, pre-sales and sales of apartments have become one of the biggest sources of cash for real-estate companies over the last few years as the government has squeezed other traditionally important channels such as bank credit and loans from trust companies.

In 2019, real-estate developers took in 6.14 trillion yuan ($873 billion) from deposits and advances, 34% of the total amount of funds they raised, and the biggest single source of funding, while bank loans accounted for just 2.52 trillion yuan, government data show. Without income from deposits and advances, many developers will struggle to fund construction of ongoing and new projects and to repay debt. A report by Ping An Securities estimated that based on an assumption of a 50% drop in operating cash flow, most developers only have enough cash to last another three months.

If sales offices do not reopen soon, many small and midsize property firms could face a cash crunch within three months, Wu Jianbin, executive vice president of Fujian-based developer Yango Group Co., a Shenzhen-listed property developer, told Caixin. “This is just the beginning and without a significant alleviation in the epidemic, it’s going to continue.”

Wu, a real-estate veteran who has worked for several big developers, said that a developer with annual sales of around 100 billion yuan would see its income cut by 20 billion yuan to 30 billion yuan if it had no sales for three months, but would still have to service its debts and make payments for the land-use rights it has bought from local governments, which might total around 10 billion yuan.

So far, the epidemic doesn’t seem to have had a major impact on bankruptcies among property developers. Data from CRIC show that in 2020 up to Feb. 10, a total of 69 property firms have failed, including 20 in early February, similar to figures from the same period in 2019. But the research firm warned in its Feb. 16 report that as the epidemic continues, more developers are likely to apply for bankruptcy. According to government data (link in Chinese), the country had almost 98,000 property development companies in 2018.

The restrictions on travel implemented by hundreds of local governments across China has presented another problem for property developers – a shortage of workers, not just in construction but also in support services such as sales and marketing. Even if workers do return to their jobs after the Lunar New Year break, they may be forced to put themselves under a 14-day quarantine. China Index Academy, a real estate research institute, said in a Feb. 4 report that in some cities the resumption of construction could be delayed by two or three months.

Many large real-estate developers including Sunac China Holdings Ltd., Country Garden Holdings Ltd., and Xincheng Holding Group have said their site offices would reopen on Feb. 18 but they have given no clear date of when construction will restart. In the Yangtze River Delta region centered around Shanghai, many developers have said they don’t expect to be able to resume construction in February, a source from a property company told Caixin.

“Given that all sales have been suspended, a delay in restarting construction will cut our labor costs which will help our cash flow management in the short term,” Wu, the vice president of Yango Group said. “But in the long run, this will have a huge impact on completion and supply” of housing, Wu from Yango said.

One short-term positive for developers is the suspension of land auctions by local governments including those in Hubei province, the epicenter of the coronavirus, which will help ease their financial burden. But it’s straining the finances of many local governments who are desperate to raise money. On Feb. 11, Beijing took the lead in re-starting auctions, selling three plots.

Property has been a money-spinner for local governments who raise trillions of yuan a year from selling land-use rights to developers and from taxes and fees they charge on a whole host of activities such as construction and sales licences. That income, already under pressure from the government’s three-year campaign to rein in housing prices, is now under even greater threat.

Any prolonged and significant negative impact on the real-estate market threatens to dent not only local economic growth but also local government income and consumption as millions of migrant workers without jobs have no money to spend. As a result, many cities have started to relax their restrictions on property sales to try and cushion the blow for developers and help them survive until the market recovers.

Foshan in Guangdong province and Chengdu in Sichuan province announced on Feb. 12 they would allow the reopening of sales offices subject to certain conditions being met in terms of epidemic prevention. Chengdu, for example, has set a cap of 80 customers a day for each sales office and visits must be staggered. Some cities are also loosening supervision of the use of funds raised from pre-sales and relaxing conditions on pre-sales for residential housing.

Local governments are also trying to ease their own financial difficulties. The eastern province of Zhejiang, and cities including Xi’an, Wuxi, Shanghai and Nanchang, have relaxed conditions for land purchases, offering the option of deferring or paying land transfer fees by installment and relaxing terms for pre-sales of new apartments, Huachuang Securities Co. Ltd. said in a Feb. 13 report.

The property market was already slowing even before the coronavirus epidemic as a result of three years of government controls to rein in house prices. But the damage to the economy and to the real-estate sector caused by the disease is fueling speculation that policymakers will have little option but to relax their curbs to support GDP growth.

So far, the government has given no indication that a change of policy is on the cards. The People’s Bank of China (PBOC), the central bank, said in its fourth quarter monetary policy report released on Feb. 19 that there will be no short- or medium-term stimulus to the property market to support the economy amid the coronavirus epidemic, and it reiterated the government’s mantra that houses are for living in not for speculation. It has also denied media reports that it would tweak quotas for property loans in its macro-prudential assessment of banks.

The authorities have given some help to ease the financial burden on developers with big debts to repay. The National Development and Reform Commission has relaxed conditions on property developers’ sales of bonds overseas, allowing them to extend the expiry date on their quotas by six months. But there has been no significant national-level support for the industry.

CRIC expects that when the epidemic is finally controlled, policy support may turn to stimulating demand for housing, and second- and third-tier cities may partially or even fully relax controls. “Cities with greater downward pressure on the market will even introduce stimulating policies such as subsidies for purchasing housing and tax cuts,” it said in its Feb. 14 report.

Wu Jianbin from Yango Group says local governments will need to show flexibility in terms of delaying tax and land purchase payments and relax conditions for pre-sales of new apartments.

Denise Jia and Lu Yutong contributed to this report.