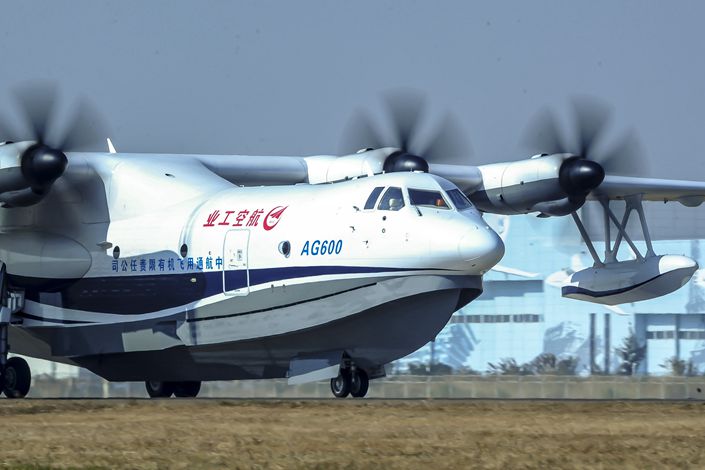 China’s leading aircraft-maker has announced a major asset shuffle that will transform its listed unit, AVIC Aircraft Co. Ltd., into the nation’s premier aircraft-related company, as it hopes to someday take on the likes of Boeing and Airbus.

The series of moves will see Xi’an Aircraft Industry Group Co. Ltd. along with two other aviation assets, moved into AVIC Aircraft Co. Ltd. via equity swaps, according to statements filed to Shenzhen Stock Exchange last Wednesday. The Xi’an company manufactures the fuselage for the C919, the main component for a China-developed plane now in the testing phase that Beijing hopes can someday challenge the Boeing 737.

In exchange for the three subsidiaries AVIC Aircraft will turn over stakes in five of its own subsidiaries to companies tied to its controlling shareholder, the state-owned Aviation Industry Corp. of China (AVIC), according to the announcement.

The shuffle will transform AVIC Aircraft into a company more precisely focused on the manufacture of aircraft both for commercial and defense use.

One of the centerpieces of the swap is Xi’an Aircraft, which manufactures the country’s homegrown ARJ21 regional jet as well as the C919 fuselage. But the Xi’an company is also relatively debt-heavy, with a debt-to-asset ratio that stood at 97.45% for the first four months of as the company held 16.15 billion yuan in total debt.

By contrast, AVIC Aircraft recorded a debt-to-asset ratio of just 65.05% as of April this year, according to the company’s interim report. China Securities expected it to rise to 73.16% for the January to April period when the acquisition ends, although the company’s market cap is expected to jump by 19.3% to 57.13 billion yuan thanks to the deal.

With financial help from AVIC Aircraft, the commercialization of China’s self-made jetliner is likely to receive a boost, as Beijing steps up its efforts to challenge the Airbus and Boeing duopoly.

The other two aircraft manufacturing firms that will move into the publicly listed AVIC Aircraft are focused more on military aviation activities.

AVIC Aircraft will hold a 100% stake in the Shaanxi Aircraft Industry Group Co. Ltd., which specializes in producing military-use aircraft, and the AVIC Tianshui Aviation Industry Co. Ltd., which is located in the northwestern Chinese province of Gansu and owns aircraft repair facilities that cater to fighter jet trainers.

Shaanxi Aircraft posted a debt-to-asset ratio of 98.47% last year, though it declined slightly to 97.38% in the January to April period this year.