By Lu Zhenhua and Sun Liangzi 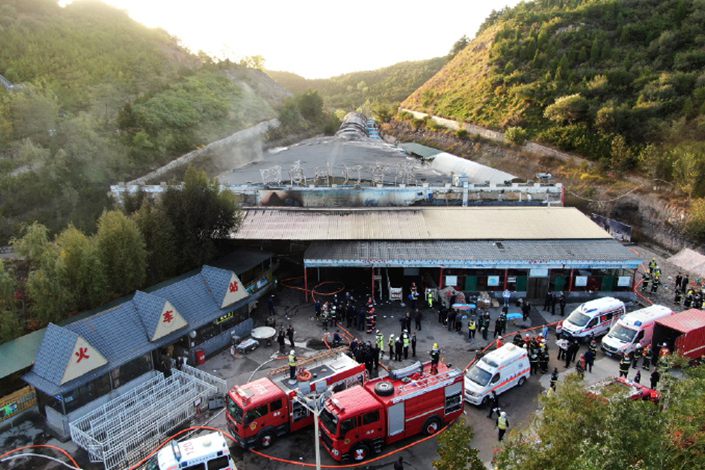 A fire broke out at the Taishan Scenic Area in Taiyuan, Shanxi province, on Oct. 1.

China’s cabinet summoned senior officials from the provinces of Shanxi and Jilin on Tuesday after both regions suffered a spate of deadly incidents, including a fire and a car crash that altogether killed 31 people during the ongoing National Day holiday.

The meeting between the State Council’s Safety Production Committee and top officials from the two provinces, who were not identified in a statement on the meeting (link in Chinese) released by the country's Ministry of Emergency Management, came after a major safety incident occurred in North China’s Shanxi on Thursday, and another in northeastern Jilin on Sunday.

In Shanxi on Oct.1, the first day of the week-long holiday, a total of 13 people were killed in a fire that broke out at a tourist site in the provincial capital Taiyuan. Previously, in August, the collapse of a restaurant in the city of Linfen left 29 dead and seven critically injured.

So far this year, Shanxi has had more such incidents — including forest fires and landslides — than any other provincial-level region, and the average death toll is also the highest nationwide, according to the emergency management ministry statement.

On Oct. 4, a deadly traffic accident involving two trucks left a total of 18 people dead ― mostly farmers on route to harvest corn ― in the Jilin city of Songyuan. In April, another road accident in Songyuan killed 12 people. Half of the nation's road accidents this year have happened in the province, the statement said.

Huang Ming, deputy director of the safety production committee and the emergency management ministry’s Communist Party chief, ordered top officials from the two provinces to analyze the causes of the accidents and draw lessons from them, according to the statement.

The committee’s statement said the two provinces are lagging behind in the implementation of a workplace safety accountability system and have failed to put people’s lives first. State Council officials asked the provinces to make genuine efforts to clean up hidden safety risks and solve problems at their root, according to the statement.