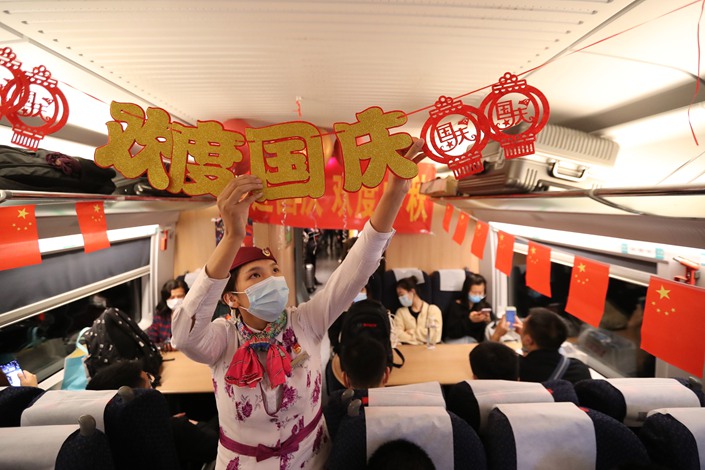 A conductor decorates a train for the National Day holiday during a trip from Chongqing North Railway Station to Wanzhou district in Southwest China's Chongqing municipality on Sept. 30.

China’s services activity expanded at the fastest pace in three months in September with a sustained increase in total new business, a Caixin-sponsored survey showed Friday, adding to signs that the sector’s post-epidemic recovery is gathering speed.

The Caixin China General Services Business Activity Index, which gives an independent snapshot of operating conditions in the services sector, rose to 54.8 last month from 54 in August. A number above 50 indicates an expansion in activity, while a figure below that points to a contraction. The index has now been in expansionary territory for five months in a row.

The reading follows a slight decline in manufacturing activity seen in the Caixin China General Manufacturing Purchasing Managers’ Index (PMI) for September, released on Sept. 30, which edged down to 53 from an over nine-year high of 53.1 in August. The Caixin China Composite PMI, which covers both manufacturing and service companies, came in at 54.5 last month, down from 55.1 in August, the Friday survey showed. The Caixin PMI is one of the earliest available monthly indicators of economic conditions in China.

“Overall, the economy remained in a post-epidemic recovery phase and improved at a faster pace. Supply and demand both expanded in the manufacturing and services sectors,” said Wang Zhe, senior economist at Caixin Insight Group.

The monthly services PMI survey for September, which was carried out between Sept. 11 and Sept. 21, showed total new business expanded at a faster pace in September than the previous month, cementing the gauge in positive territory for a fifth consecutive month.

However, new export business contracted further in September and remained in negative territory for the third month in a row. Domestic supply and demand in the services sector continued to recover at a faster pace, while overseas demand remained subdued given uncertainties about the pandemic, said Wang.

Service providers recorded a much softer rise in input costs during September, with the rate of inflation falling to a three-month low following a decline in June. Surveyed enterprises that reported higher costs generally attributed it to increased expenses related to transport, staff and raw materials, according to the survey.

Prices charged by services companies in China rose for the second month running last month, though there were also reports that tough market competition had limited overall pricing power, the survey said.

The gauge for employment in the services sector continued to expand for the second consecutive month in September after spending six months in contractionary territory.

“Employment in the manufacturing and services sectors improved simultaneously for the first time post-epidemic,” said Wang, “but the improvements were not particularly strong, and one should not be overly optimistic about the employment situation.”

The gauge for business expectations over the next 12 months rose further into expansionary territory last month.

China’s official services PMI, which was also released on Sept. 30 ahead of the extended National Day holiday, rose to 55.2 (link in Chinese) in September, the highest reading since mid-2012.

Economists at Macquarie Capital Ltd. said in a research note released Sept. 30 that both property and infrastructure investment, which have largely driven China’s post-Covid-19 recovery, should be at around peak growth given the recent policy turn, which has included tighter scrutiny of property loans. That means in the coming months, the recovery has to rely on the other half of the economy: manufacturing investment and consumption, especially service consumption, the economists said.

Macquarie said in a report released Monday that China’s GDP growth could accelerate to 4.7% year-on-year in the third quarter this year, up from 3.2% in the second quarter. Meanwhile, economists at Nomura International (Hong Kong) Ltd. expect GDP growth of 5.2% in the third quarter, according to a note released Sept. 28. China will announce its third-quarter GDP figure on Oct. 19.