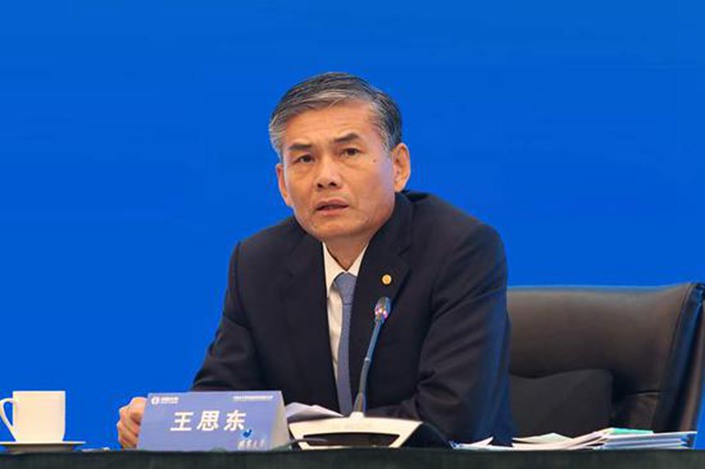 Wang is filling the vacancy left by Luo Xi, who has taken over as Communist Party chief and chairman of The People’s Insurance Co. (Group) of China Ltd., a state-owned insurer which is caught up in a massive fake gold scandal. Wang was also appointed as China Taiping Insurance’s party chief, the company announced (link in Chinese) on Monday.

Wang, 58, previously worked at the Ministry of Foreign Economic Relations and Trade, now the Ministry of Commerce, and the state-owned Xinhua News Agency’s Hong Kong branch, before he stepped into the insurance industry in 2000.

After working at China Life Insurance (Group) Co. and its subsidiaries for nearly two decades, Wang joined China Taiping Insurance as vice chairman in January 2018, working under then-chairman Wang Bin. In September of that year, Luo replaced Wang Bin as the company’s chair.

“Serving under two strong-willed chairmen, Wang Sidong just did his own job with a down-to-earth attitude,” a manager at China Taiping Insurance told Caixin.

Wang Sidong’s new appointment comes as the state-backed insurer has been heavily hit by the coronavirus pandemic. In the first half of this year, China Taiping Insurance Holdings Co. Ltd., China Taiping Insurance’s Hong Kong-listed subsidiary, saw profit attributable to shareholders slump 57.3% year-on-year to HK$2.9 billion ($371 million), according to its latest interim report.

In the first half of 2020, the new business value of its life insurance business, a closely watched metric that measures future profitability of new policies, declined by 58.7% year-on-year, it said. The metric has declined each year since 2018.

However, the company’s investments grew steadily in the first half, with its total invested assets rising 11.8% to HK$832 billion from the end of last year to the end of June, higher than the industry average, according to the report. The insurer’s total investment income increased by a third year-on-year in the first half, with its annualized investment yield up 0.55 percentage points year-on-year, it said.

Faced with China Taiping Insurance Holdings’ relatively low investment yield compared to its peers back in 2018, Wang Sidong said in early 2019 (link in Chinese) that the company would focus on higher-quality and longer-term equity investment, and make its investment subsidiaries more professional and market-oriented.