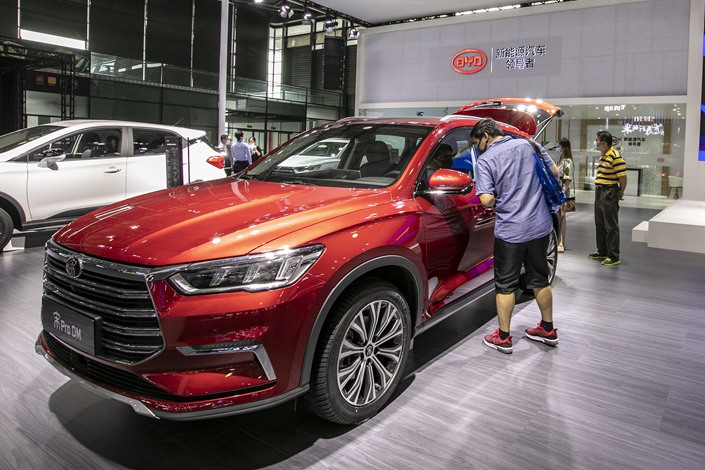 A conference-goer checks out a BYD model at an auto show in Shanghai on Oct 3.

Chinese carmaker BYD Co. Ltd. said it expected to earn 600 million yuan ($89.3 million) more profit over the first three quarters than it had predicted in August, thanks to robust sales of its electric vehicles last month.

The company revised up its profit for the January to September period this year to between 3.4 billion yuan and 3.6 billion yuan, up by at least 116% year-on-year, according to a filing to the Hong Kong Stock Exchange on Monday.

BYD attributed the growth to a major rebound in September sales of “new energy vehicles” (NEVs), up 45% year-on-year to some 19,800 units, rising from a low of just 2,800 in February. September was the first month in 2020 that BYD saw year-on-year growth in sales of its NEVs, buoyed by a broader recovery of China’s car market from the effects of Covid-19.

Fresh data from China Association of Automobile Manufacturers suggested the country sold a total of 138,000 of such vehicles last month, up 67.7% year-on-year.

But even with the sparkling figures, the Shenzhen-based carmaker still faces cutthroat competition in the fast-changing sector. Its American rival Tesla Inc. has maintained monthly sales of its Model 3 in China at around 11,000 since May, and a less-known joint venture between U.S. General Motors Co. and a local carmaker topped the September sales chart with over 20,000 miniature NEVs sold.

Younger rivals like Nio Inc. and Xpeng Inc., both listed in the U.S., are catching up, more than doubling their sales over the same period.

But BYD is in relatively better financial shape than its peers, after the firm switched some of its production lines to medical gear to offset slumping car sales amid the pandemic. Earlier this year, it secured two contracts worth a combined $1.3 billion with the government of California to supply the U.S.’ most populous state with 820 million facemasks.

The company’s interim report said it raked in 1.67 billion yuan for the first half of 2020, up by 14.09% year-on-year, and claimed to be the world’s biggest facial mask manufacturer.