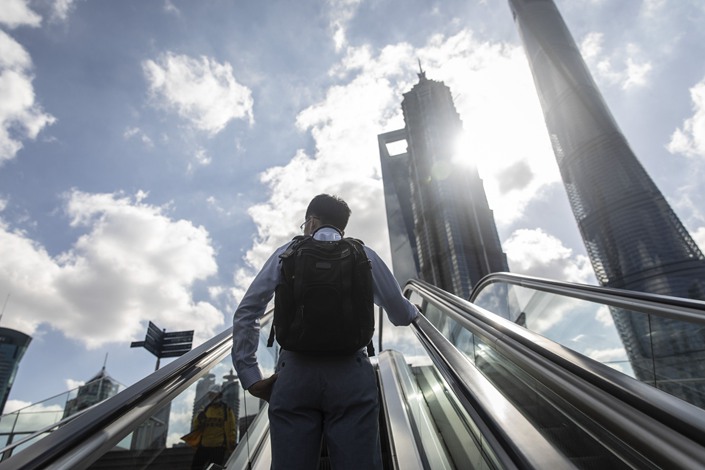 The share of state money in China’s 10 trillion yuan ($1.6 trillion) private investment market is expanding even as many venture capital and private equity investment companies face a shrinking business.

“We can clearly feel the rise of state capital,” said Xu Qing, managing partner of Oriza Fund of Funds, a Beijing based fund management firm. “When we managed funds several years ago, the share of state capital was often controlled below 50%. But now nearly 80% of money on the market is from the state.”

By the end of June 2019, there were 1,686 such funds set up by Chinese governments at all levels, with a total value of 4.13 trillion yuan ($613 billion), according to Zero2IPO Research. That would be more than a third of all funds managed by the country’s nearly 15,000 VC and PE companies.

Governments have accelerated establishments of guidance funds, using them as vehicles to provide financial support to strategic industries such as computer chip-making and advanced manufacturing that require long-term investment and high risk tolerance. The boom in guidance funds reflects governments’ intention to use equity investments as a major tool to guide the implementation of industrial policies and boost private investment, one official said.

However, in practice, government guidance funds also suffer from the same flaws as many other investment funds, such as poor management and overlapping investment in white-hot targets. Meanwhile, VC and PE fund managers often complain of administrative interventions in investment decisions due to governments’ preference for control.

Here are some key facts about China’s guidance funds and their role in the private investment market.

What is a government guidance fund?

Government guidance funds evolved from government-backed industrial investment funds that thrived since the mid-1990s to help upgrade the country’s industrial structure. They have become the major industry-supporting vehicle since the early 2000s.

Money for the government guidance funds usually comes from public coffers. The funds normally operate as funds of funds, which invest in other equity investment funds. Typically, state investment takes a minority share in private investment funds. To prevent state overreach, policymakers at various levels in different localities have set caps on the ratio of government investment in a fund, generally between 20% and 30%.

According to a 2007 policy document, guidance funds are meant to be withdrawn five years after an equity investment in a VC firm is made by selling equity in the VC business to other shareholders or new investors.

How did the funds work over time?

The first guidance fund was created in Beijing in 2002 to support cash-starved startups at the Zhongguancun Science Park, a famous Beijing tech hub. In 2005, the National Development and Reform Commission (NDRC) formally defined guidance funds and encouraged local authorities to set up such funds to support development of startups, especially small and midsize tech enterprises, through investments in VCs.

The development of government guidance funds can be roughly divided into three phases. Between 2000 and 2014, the funds mainly focused on VC investments in startups.

But the rapid expansion also sparked concerns over the management and risk control of funds. Since 2018, as the government tightened scrutiny of all sorts of asset management to rein in financial risks, government guidance funds have come to face greater challenges in adapting to a new market environment.

What role do the funds play in the market?

Government guidance funds have accounted for a significant share of China’s private investment market, sparking debate over their role.

State capital has become the main funding source of China’s VC and PE funds in recent years, an industry analyst said. He estimated that about 75% of funds raised by leading PE firms come from local and central government-backed funds.

The total value of government guidance funds and private funds in which they invested reached 8.2 trillion yuan as of the end of June 2019, data from CVSource showed.

What challenges face the government funds?

Government guidance funds have suffered problems that are shared by many investment funds, such as excessive leverage and inadequate risk control. Some local governments borrowed money from shadow banks to invest in projects with quick returns rather than providing long-horizon investments as top policymakers intended.

Some local governments required VC and PE funds to promise certain investments into the local economy before receiving money from government guidance funds, a practice that blocked many partners and was widely criticized for reducing the funds’ efficiency.

Jiang Yucai, vice president of Shenzhen government-backed Shenzhen Capital Group Co. Ltd., said it is a challenge for government guidance funds to find a balance between their fiscal requirements and market operations.