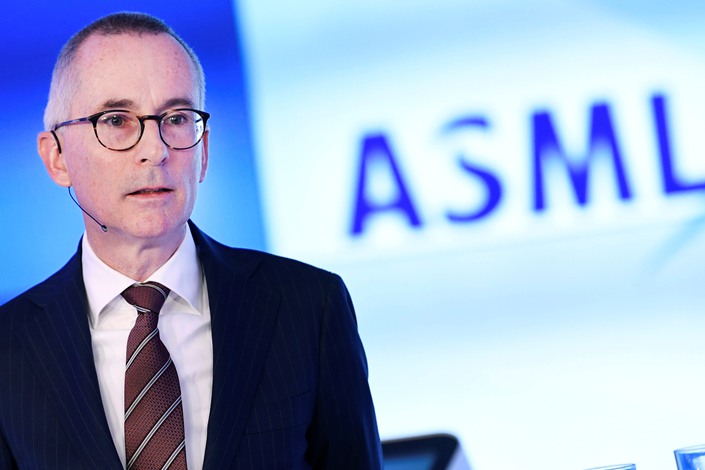 ASML doesn’t require a special U.S. export license to ship its less-advanced microchip-making equipment from its Dutch headquarters directly to customers in China, its CEO said, even as Washington has reportedly tried to limit the company’s sales to the Asian country.

ASML CEO Peter Wennink made his comments as his company — one of only a handful capable of making equipment to produce the world’s most advanced microchips — becomes increasingly caught up in Washington’s ongoing battle to stymie Beijing’s aspirations to build China into a world-class maker of the products that are central components to most electronic gadgets.

Washington has used its muscle to stop most U.S. suppliers from providing China the hardware, software and other services it needs to build up its chip sector. It has also used indirect pressure on non-American companies, such as working with allied governments and also by threatening to cut off such firms from their American business partners if they sell to China.

Speaking on a conference call to discuss ASML’s latest quarterly results, Wennink said his company was aware of recent restrictions imposed by the U.S. on technology exports to certain companies in China. That list includes telecom equipment and smartphone giant Huawei Technologies, which has been one of the major focuses of Washington’s campaign under the administration of President Donald Trump.

More recently, Semiconductor Manufacturing International Corp. (SMIC), China’s most advanced chipmaker, has also fallen onto Washington’s radar. SMIC confirmed last week that some of its suppliers had received letters from the U.S. Bureau of Industry and Security (BIS) telling them that exports to the Chinese company are subject to additional export restrictions.

Wennink said ASML believed it can still sell equipment that uses deep-ultraviolet technology (DUV) to make advanced microchips directly from its headquarters in the Netherlands to China, according to a transcript of his remarks on the Seeking Alpha website. He did not comment on whether U.S. requirements would affect the sales directly from the Netherlands to China for the latest generation of equipment that uses a more advanced technology called extreme ultraviolet (EUV) technology.

“Regarding U.S. export rules to China, we are aware of the requirements set by the U.S. Commerce Department for specific companies in China, and as such, according to the current regulation, ASML can continue to ship (DUV) lithography systems from the Netherlands,” he said, without naming any specific companies. “ASML requires a U.S. export license for systems or parts that are shipped directly from the U.S. to customers affected by the rules.”

Wennink added that China accounted for about 21% of ASML’s revenue in its latest reporting quarter, and that it expected sales to “domestic Chinese customers” to grow to more than 1 billion euros ($1.2 billion) this year.