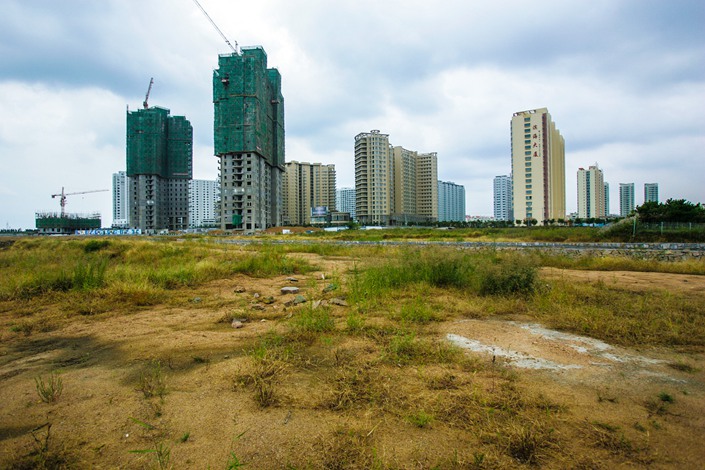 The slowing market adds to evidence that China’s real estate sector is under pressure as policymakers step up efforts to control debt risks and crack down on speculation in residential property.

The government’s tightening grip on property developers’ debt and leverage is trickling down into the land market as the lack of new financing and pressure on cashflow has curbed builders’ appetite for adding to their reserves.

The average price of land-use rights sold in September fell 2% from the previous month to 2,621 yuan ($390) per square meter, the third straight monthly decline, in the 300 cities monitored (link in Chinese) by property consultancy China Real Estate Information Corp. (CRIC). Average transaction prices at auction were 15.2% higher than the reserve prices set by local governments, the lowest premium since March, the data show.

The slowing market adds to evidence that China’s real estate sector is under pressure as policymakers step up efforts to control debt risks and crack down on speculation in residential property. “A real estate bubble is the biggest ‘grey rhino’ that threatens financial security,” Guo Shuqing, head of the China Banking and Insurance Regulatory Commission, wrote in an article (link in Chinese) published in party journal Qiushi in August.

The squeeze on developers is coming from both the demand and supply side. Many local governments have stepped up restrictions on home buying and mortgages over the past few months, and financial regulators are gearing up to introduce new policies to restrict the ability of developers to take on more borrowing, a move that is already affecting their desire to build up their landbanks. In September, 31 companies representative of the sector and monitored by CRIC added 31.2 million square meters to their land reserves (link in Chinese), 10% less than in August.

“Pressure on developers’ financing is emerging and their enthusiasm for buying land has declined,” said a report (link in Chinese) by property research firm China Index Academy Ltd. The land market is gradually becoming more rational and will continue cooling down in the fourth quarter amid tightening oversight on developers’ financing, the report said.

China’s land market went into overdrive earlier this year –– local governments scrambled to make up for time lost during the Covid-19 lockdowns and pent-up demand from developers led to a jump in sales and prices. Money raised from the auction of land-use rights makes a significant contribution to the fiscal revenue of many local authorities.

In an August land auction in Xuzhou, a city in the eastern province of Jiangsu, the premium for one parcel of auctioned land reached 63.3%. The government subsequently issued a slew of measures to try and cool down activity.

The market is gradually getting back to normal and as many local governments approach annual quotas, sales have been moderating in bigger, more popular cities, although overall sales are still increasing. Data from CRIC show that total land supplies in the 300 cities it monitors rose 15% month-on-month in September.

The amount of “high-quality” land in prime locations that command a higher price is shrinking, a factor that is also contributing to the decline in average prices. In September, prime land with a starting price at auction of more than 10,000 yuan per square meter dropped to 2.1% of the total land supply from 2.2% in August.

Some local authorities have been trying to cool down the market by tightening oversight and supplying less high-quality land. In August, the Nanjing government put more restrictions (link in Chinese) on developers’ land purchases by setting tougher conditions on prices and the source of funds used to pay for land.