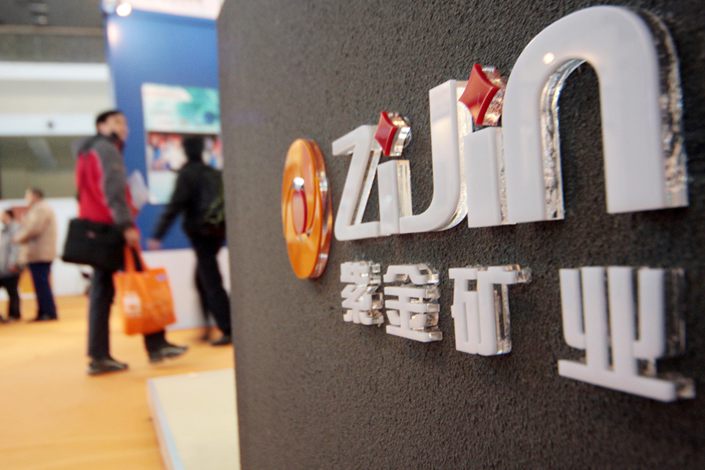 Zijin’s bottom line was buoyed by an average sale price for gold that was up 24% from the end of last year while costs remained flat.

The Xiamen-based firm’s revenue rose 28.34% from the same period last year to 130.4 billion yuan, according to the unaudited figures in its quarterly financial report filed to the Shanghai Stock Exchange on Tuesday.

Zijin attributed the growth to the more than 30% year-on-year jump in both its copper and silver output, which hit 345,300 tons and 217,736 kilograms respectively, according to the report. Those increases amounted to an extra 1.75 billion yuan in gross profit over the same period in 2019.

Despite a clash between the Papua New Guinea government and Zijin’s local joint venture over the extension of the firm’s right to operate a $1 billion-a-year gold mine on the island country, the Chinese company managed to keep its gold output around the same level as last year — some 29,463 kilograms.

Zijin’s bottom line was buoyed by an average sale price for gold that was up 24% from the end of last year while costs remained flat.

On Thursday, Papua New Guinea Prime Minister James Marape announced that Zijin’s local joint venture “will retain operatorship” of the mine. "We have agreed in principle that Papua New Guinea will take a major share of equity under the new arrangements,” he said in a statement.

Marape did not specify the size of the stake, but under the previous terms Zijin and its Canadian partner Barrick Gold Corp. each owned 47.5% of the Porgera mine, with the remaining 5% held by local government body Mineral Resources Enga Ltd.

Read more
In Depth: How a Chinese Miner Lost the Rights to a Pacific Island Gold Mine

Still, the health of the company’s balance sheet has deteriorated. By the end of September, its transactional financial liabilities had tripled from the beginning of the year to 1.36 billion yuan after several acquisitions. Other current liabilities skyrocketed by 703% to 4 billion yuan over the same period, according to the report.

Zijin shelled out 3.88 billion yuan in June for a 50.1% share in a Tibet-based mining firm, and recently finalized an acquisition of Canada-listed Guyana Goldfields Inc. for C$323 million ($245 million) in cash.

Zijin’s debt-to-asset ratio stood at 60% at the end of the first half, four percentage points higher than that of its hometown rival, Shandong Gold Mining Co. Ltd.

Zijin plans to issue 6 billion yuan in convertible bond to support its Kamoa-Kakula copper mine in the Democratic Republic of Congo and its Timok copper and gold mine in Serbia, but is still waiting for approval from Chinese financial regulators.