The Post-Covid Trading Floor Is Here — With Buffet Lunches, No Masks 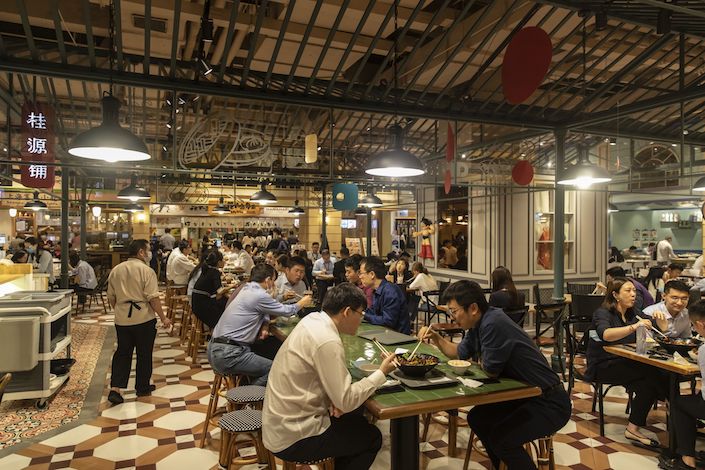 Lunch hour at a foodcourt inside Shanghai Tower

(Bloomberg) — On the trading floor at Bank of Communications Co.’s $164 billion wealth management unit in Shanghai, traces of the worst pandemic in a century are hard to find.

All of the firm’s traders have commuted to work on a recent Friday morning, sitting about two feet from each other in an open-plan office. Not one of them wears a mask. At noon, with Chinese exchanges shut for lunch, the group heads downstairs to the bank’s canteen for a buffet-style meal.

Similar scenes are playing out across Shanghai, the world’s first major financial hub to grapple with Covid-19 and the only one so far to tame the virus. Shanghai has reported zero new local cases since June. While the city’s early outbreak was far less severe than those that continue to torment London and New York, Shanghai’s return to something approaching a pre-Covid normal offers a counterpoint to those who predict the pandemic will forever change the way the financial industry works.

Yes, the city’s more than 360,000 finance professionals continue to face temperature scans and strict ID checks to enable contact tracing. And a few firms are still rotating employees through the office in shifts. But Shanghai’s traders, bankers and support staff are mostly free to eschew masks, chat face-to-face with colleagues, host visitors in snug conference rooms and fly domestically to meet clients. Restaurants in the financial district are bustling, and the weekday commute is once again the same snarled horror as before.

“Business is very much back to usual,” said Hubert Tse, a Shanghai-based partner at Boss & Young, a law firm whose clients include financial companies.

Of course there’s no guarantee Shanghai’s experience will be repeated in other financial hubs, even if a coronavirus vaccine becomes widely available. But the coastal Chinese city’s recovery offers a glimmer of hope for industry titans like JPMorgan Chase & Co.’s Jamie Dimon and BlackRock Inc.’s Larry Fink, who have voiced concerns about the impact of remote work on their companies’ cultures and the economy as a whole. It’s also a positive sign for commercial landlords, who worry about rising vacancy rates and falling rents.

At Bocom, the largest state-owned lender in Shanghai, all 10,000 employees are now working primarily from the office. JPMorgan has a majority of staff back at its office in Shanghai Tower, China’s tallest skyscraper, people familiar with the matter said. While they’re told to keep a meter apart, JPMorgan’s employees can meet clients, dine together and walk the halls without masks. The local management committee has been given discretion to make virus-related decisions when needed. Globally, a majority of the company’s employees are still working from home.

About 90% of staff at Citigroup Inc.’s main base in Shanghai are back in the office, albeit still working in split operations across some teams and with flexibility to work from home. That compares with about 75% in Hong Kong, according to a spokesman. Swiss wealth giant UBS Group AG has allowed all its staff in China to return to work in line with local government guidelines, while worldwide only 20% of its employees are back. It’s no longer mandatory for staff in China to wear masks even though the bank continues to distribute them.

The stakes are especially high for international financial companies in China after the government recently relaxed restrictions on foreign competition. Nearly all of the industry’s biggest players are jostling for an edge, and face-to-face interactions are seen as key for hiring and building client relationships.

The country’s finance executives are quick to note that a more relaxed approach toward social distancing doesn’t equal complacency. France’s BNP Paribas SA is keeping 20% of employees in critical functions spread across different locations in China, while JPMorgan is asking people to leave a clean desk with only a phone, a mouse and a monitor to allow for easy cleaning. Bank of Shanghai Co. requires visitors to be registered one day in advance.

Cushman & Wakefield Vanke Service, one of the biggest commercial property managers in China, has deployed a range of new measures to prevent an outbreak, according to CEO Johnson Yip. They include infrared temperature checks and facial recognition at modified, one-way entrances to trace potential cases. About 90% of workers have been back in buildings under its management since April, Yip said.

Almost every big financial company in China now has an extensive contingency plan should the virus return. When Industrial & Commercial Bank of China Ltd. discovered that 33 staffers at its Beijing headquarters had developed a fever and cough on the same day in mid-May, the lender quickly alerted everyone with access to the building along with government officials and other financial institutions across the city. The ICBC employees were ultimately diagnosed with scarlet fever, which is treatable with antibiotics.

For banks in the U.S. and Europe, a return to normal looks still far off as Covid-19 infection rates accelerate. JPMorgan, which has about 20% of its staff back in New York and London, last month told thousands at its consumer unit to keep working from home into next year. Some banks in London are urging workers to stay out of the office, while the biggest Dutch lenders predict staff will be working about half their time from home even after the pandemic passes. Deutsche Bank AG has initiated steps to reduce its office space, as have Japan’s Mizuho Financial Group and Nomura Holdings Inc. among others.

Luke Ellis, CEO of Man Group, the world’s biggest publicly traded hedge fund, said last month his company won’t even try to get back to having more than about 70% of staff working in the office on any given day.

The post-Covid reality in Shanghai casts doubt on how long that mindset will last.

“The change in working habits has turned out to be less than anticipated,” said Henry Chin, the head of research for APAC and EMEA at CBRE Group Inc. in Hong Kong. “It means financial hubs like London and New York could be similar when the pandemic eases.”