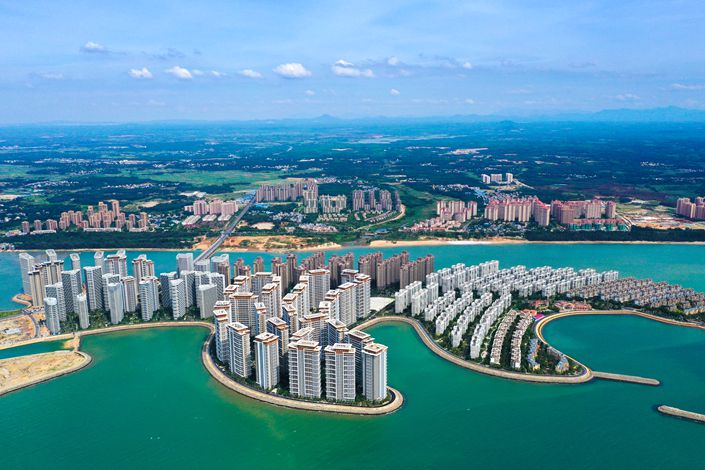 A major seaside resort being developed by cash-challenged China Evergrande Group is among a list of property projects that have come under fire after construction continued despite a government call for a halt to work and rectifications over environmental violations.

The latest government rebuke this week comes as a major new headache for Evergrande, which is struggling under a mountain of $120 billion in debt, about $5.8 billion of which is maturing in the next two months. The case also spotlights a relatively common practice by Chinese developers that sometimes skirt or ignore local rules and zoning restrictions in a rush to build the most profitable projects, often residential, and face the consequences later.

The latest case dates back to 2017 when a Caixin report exposed a number of developments that were violating local environmental protection rules in Hainan, an island province in China’s south known for its beaches and warm winter temperatures.

Evergrande’s Ocean Flower Island was one of the developments, planned as a 160 billion yuan ($24 billion) tourism-retirement resort constructed on three man-made islands with an area of nearly 2,000 acres in the city of Danzhou. The massive development included villa, hotel, retail and theme park components, with units going on sale starting in late 2015.

Not long after the 2017 Caixin report, the central government sent an environmental inspection team to review the situation. The local government then issued a document the next year, calling on all parties to halt construction and rectify violations of local environmental protection laws.

The latest follow-up document, issued on Monday, found that despite the earlier call, some of the projects had continued with illegal land reclamation, resulting in environmental damage.

It said Evergrande had continued work on the Ocean Flower project, including the construction of four culvert bridges covering 369 ocean-front hectares (912 acres). The document went on to add that since the original 2018 government report, Evergrande had also continued construction on 39 new residential buildings that should have performed supplemental environmental assessments.

The latest document calls on Evergrande to demolish the four illegal bridges by May 2023, as well as accompanying infrastructure, to restore the land to its previous state. It also calls for a halt to construction on the 39 residential buildings, withdrawal of presale permits for those, and rectification of that part of the development before the end of this year.

The report further specifies that more than 400 acres of undeveloped land at the Evergrande project cannot be used for residential buildings, and that Evergrande must set up a fund to make required restorative efforts.

The setbacks come as Evergrande, one of China’s largest developers, has seen its bonds sag in recent weeks over concerns about its ability to handle its large debt load. Its shares tumbled earlier this month after it raised just half the amount it had targeted from a share placement. But the company appeared to be getting some local relief last week when it received an exemption from a key restriction for new apartments it was preselling in the southern metropolis of Guangzhou.