In Commemorating Korean War, Xi Warns Infringement of Chinese Territory Will Be Met ‘Head On’ 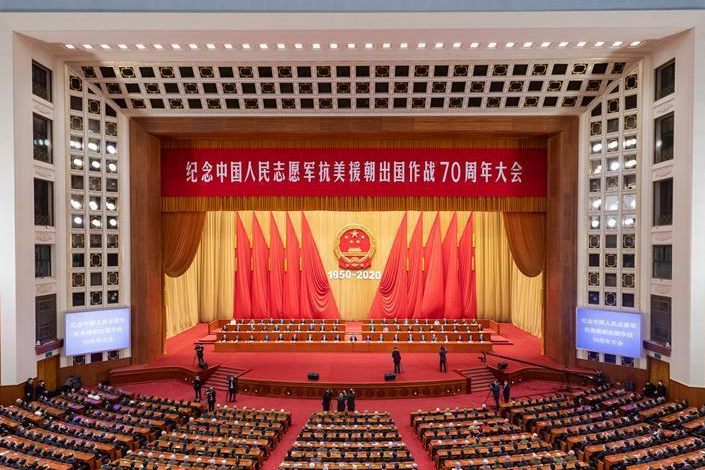 President Xi Jinping delivered remarks during a ceremony Friday at the Great Hall of the People in Beijing marking the 70th anniversary of Chinese troops entering North Korea helping it fight in the war to “Resist U.S. Aggression and Aid Korea.” Photo: Xinhua

President Xi Jinping warned Friday that maximum pressure against China will lead to a “dead-end” and the country will hit anyone who infringes on Chinese territory “head on” as tensions between China and the U.S. in the South China Sea and Taiwan Strait continue to rise.

Xi delivered the remarks during a high-profile ceremony at the Great Hall of the People in Beijing that marked the 70th anniversary of Chinese troops entering North Korea, officially named the Democratic People's Republic of Korea, helping it fight in a war to “Resist U.S. Aggression and Aid Korea” (抗美援朝).

“After arduous battle, Chinese and Korean troops, armed to their teeth, defeated their opponents, shattering the myth of the invincibility of the U.S. military, and forcing the invaders to sign the armistice agreement on July 27, 1953,” Xi said (link in Chinese) in a speech.

Analogies have been drawn online between the country’s only war with the United States on the Korean Peninsula and the ongoing bitter China-U.S. rivalry, which has caused bilateral ties to sink to the lowest point since the two countries established diplomatic relations in 1979.

Since U.S. President Donald Trump took office in 2017, Washington has conducted an all-out maximum pressure campaign against Beijing through a tit-for-tat trade war, imposing visa restrictions on Chinese students and scholars, and furthering alliances with its partners in the Indo-Pacific region.

This ceremony came as the U.S. military has been intensifying close-up reconnaissance missions off China’s coastline in the South China Sea, increasing the frequency of warships’ transits through the Taiwan Strait, and speeding up its arms sales to the Taiwan region, all of which Beijing sees as Washington bullying China.

Without directly referring to the U.S., Xi said to “Let the world know that the people of China are now organized, and are not to be trifled with,” quoting the country’s founding father Mao Zedong. “It’s not easy to stop them once they are riled up,” he said.

“We will never sit idly by while China's sovereignty, security and development interests are undermined, nor will we allow anyone or any force to infringe upon or split Chinese territory,” he said.

“Without a strong army, there can be no strong motherland,” Xi added.

The Chinese president has on multiple occasions demanded that the People’s Liberation Army (PLA) boost its readiness for war. During a visit last week to the PLA’s Marine Corps in Chaozhou, South China’s Guangzhou province, Xi urged the marines to focus on their war preparedness and combat capabilities, and stick to combat-oriented training, according to state media reports.

The Chinese military has been intensifying military exercises, including live-fire drills, in parts of the Yellow Sea, the East China Sea and the South China Sea. China's two aircraft carriers, the Liaoning and the Shandong, also conducted their first dual-carrier exercise in early September.

On Thursday, the PLA Daily published a commentary (link in Chinese) saying that the Korean War “left the Americans with a deep impression that there are red lines and bottom lines for the Chinese to defend core national interests.”

In North Korea, leader Kim Jong Un sent floral baskets to a cemetery for Chinese soldiers killed in the war, where participants at a ceremony to mark the anniversary “paid silent tribute to the martyrs of the Chinese People’s Volunteers,” the state’s official Korean Central News Agency reported Friday.

More than 1 million Chinese soldiers were deployed to the Korean Peninsula from 1950 to 1953. Beijing says nearly 200,000 Chinese died there.