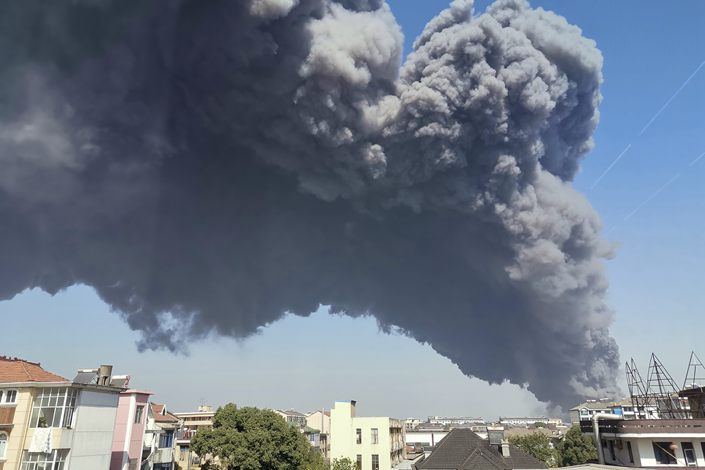 Satellite data showed smoke from the explosion had blown southwest to the nearby city of Shangrao about 120 kilometers away in adjacent Jiangxi province.

An explosion rocked a chemical factory in East China’s Zhejiang province on Monday, sending huge clouds of toxic smoke into the air before being extinguished by Tuesday morning, according to the provincial fire authority.

No injuries or deaths were reported in connection with the accident, which began with an explosion at about 11:25 a.m. Monday at the Transit Fluorine Silicon Material Co. Ltd. complex in the city of Quzhou, according to the official microblog of the Zhejiang fire authority. A Tuesday morning post said the fire had been mostly extinguished as of 7 a.m. the next day by a brigade of 548 firefighters and 126 trucks.

The authority added the main chemicals in the fire were silicon powder and chlorosilane. Such accidents are particularly hazardous because they can send toxic chemicals into the air that travel long distances, and poison nearby water sources.

The original explosion was followed by at least one other major one around 6:50 p.m. Monday, according to a live CCTV broadcast from the accident scene. A reporter said tests at the scene by environmental inspectors showed the level of airborne pollutants had risen by eight to 10 times the usual level to the point that the air smelled of toxic chemicals.

Satellite data showed smoke from the explosion had blown southwest to the nearby city of Shangrao about 120 kilometers away in adjacent Jiangxi province. One resident said he could see the smoke blowing by, slowly darkening the sky.

Transit Fluorine Silicon is a maker of silicon-based products, including silicon sealants that are one of the main items displayed on its website. Methyl chlorosilane is a toxic chemical used to make water repellants, and is also a dangerous fire risk, according to the website of the U.S. National Oceanic and Atmospheric Administration. It added that contact with the material can cause severe irritation to the skin, eyes and mucous membranes.

Transit Fluorine experienced another explosion in 2013, but reports from that time said no one was injured, and the air and water in surrounding areas were not affected.

China was once known for sometimes lax practices in chemical-producing plants that could lead to similar accidents and environmental damage, though it has taken measures more recently to reduce such risks. Lack of preparedness for dealing with such accidents sometimes compounded such situations in the past.

A much larger case that made global headlines occurred in 2015, when a series of explosions in an industrial area in the coastal city of Tianjin left more than 170 people dead, including more than 100 firefighters who were initially unaware of the nature of the blaze they were battling. That accident caused more than $1 billion in damage and left more than 300 buildings damaged or destroyed.