By Guo Yingzhe and Wang Jing 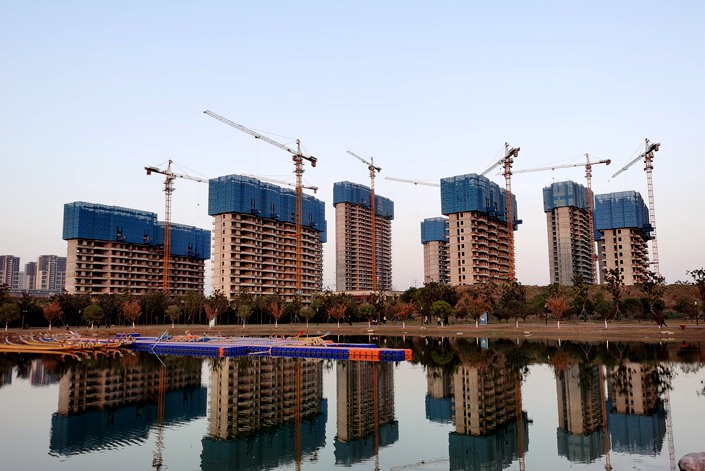 Although the initiative is only being trialed at some of the biggest builders and no date has been publicly announced for its rollout to the entire industry, developers aren’t hanging around to wait for its implementation.

China’s property developers are already working hard to bring their finances into line with the three red lines proposed by regulators in August aimed at controlling debt and defusing risks in a sector that’s increasingly seen as a potential danger to financial stability.

Although the initiative is only being trialed at some of the biggest builders and no date has been publicly announced for its rollout to the entire industry, developers aren’t hanging around to wait for its implementation.

At the end of the third quarter of 2020, the overall net debt-to-equity ratio of 130 Chinese mainland-listed real estate companies had fallen to 90.9% from 99.7% in the same period last year, property analysts at brokerage Shenwan Hongyuan Securities Co. Ltd. wrote in a report issued Monday. A previous report by the securities firm put the ratio at 92.4% at the end of June.

Midsize developers made greater progress than flagship and smaller companies, with the overall net debt-to-equity ratio of 31 listed real estate companies in the middle cohort falling 15.2 percentage points from the third quarter of last year to 106.4%. In contrast, flagship developers saw their net debt-to-equity ratio edge down by just 0.5 percentage points to 99.1%. The brokerage defines midsize developers as those with annual revenue of 12 billion yuan ($1.8 billion) to 100 billion yuan in 2019, and flagship developers as those with revenue of more than 100 billion yuan.

Real estate companies are set to face stricter limits in terms of borrowings after regulators issued a new financing directive in August at a meeting with 12 top real estate developers, notifying company executives verbally that they had been selected for a pilot to test the rules before a potential rollout to all builders. They are the latest in a slew of measures issued over the past few years in an attempt to control rising debt among property companies which was seen as contributing to a price bubble and adding to risks in the financial system. Policymakers also wanted to redirect credit to manufacturers and high-tech industries, some analysts have said.

The government has not issued an official statement detailing the rules, but sources have previously told Caixin that property developers will be subject to three red lines (三条红线): a liability-to-asset ratio (excluding presales) of no more than 70%; a net debt-to-equity ratio of under 100%; and cash holdings at least equal to short-term debt.

“The long-term strategy on real estate financing marked by the ‘three red lines’ is a major milestone in changing the industry’s development path,” Huatai Securities Co. Ltd. analysts wrote in a report on the outlook for the sector in October. It will break real estate companies’ long-standing dependence on leverage to drive their expansion, it said.

Some analysts estimated that flagship property developers would benefit from the new financing directive because it will be hard for smaller companies to catch up by adding leverage. Funds will flow to large companies who have sound financial situations, quality management and diversified land holdings, according to a Tuesday report from China International Capital Corp. on the 2021 outlook of the real estate industry.

Given the potential threat to their financing, some developers are already moving to get behind the red lines even though the directive has not yet been implemented across the entire sector. According to property analysts at Essence Securities Co. Ltd., nine out of the 49 companies they analyzed crossed fewer red lines in the third quarter than in the second. Shenzhen Overseas Chinese Town Co. Ltd, one of the 12 companies in the trial, stayed below all three red lines in the third quarter after crossing the threshold for two in the second quarter, the analysts calculated.

However, two companies –– Dima Holdings Co. Ltd., a developer based in the southwestern municipality of Chongqing, and Gemdale Corp. –– bucked the improvement trend, both crossing the liability-to-asset ratio (excluding presales) red line.