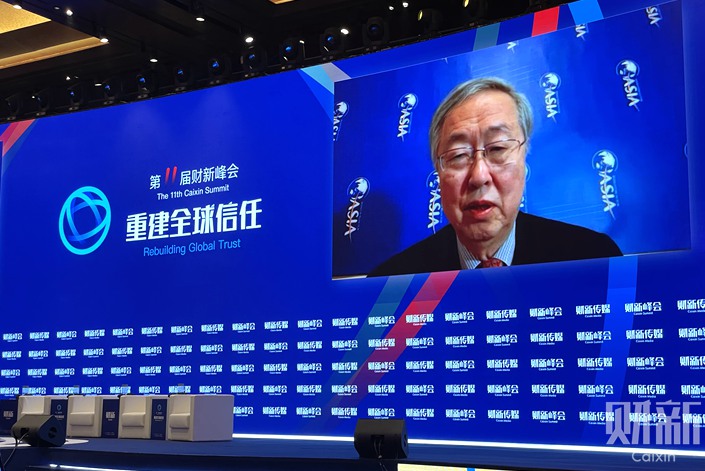 Zhou launched the defense in a speech at the Caixin Summit held in Beijing as Covid-19 rages around the world and burdens many countries with heavy debt in their efforts to control the pandemic amid national lockdowns. The situation is worse for low-income, heavily indebted developing countries, who need international bailouts such as extending debt repayment deadlines.

“(Some countries) pass the buck to China and blame it for making those low-income countries heavily indebted through the Belt and Road initiative,” Zhou said via video link on Friday.

Zhou reiterated China’s commitment to multilateralism. But multilateralism has faced many challenges, he said, especially when U.S. President Donald Trump’s administration decided or threatened to withdraw from the Paris climate-change agreement, the World Trade Organization (WTO) and the World Health Organization in the past three years.

While adhering to the concept of multilateralism, it is important to improve the mechanisms and abilities of multilateral institutions, as well as multilateral rules, to enable them to adapt to evolving globalization, Zhou said.

He said some international organizations, including the WTO, the International Monetary Fund and the Bank for International Settlements, have played limited and worse-than-expected roles in global coordination. He referred particularly to coordination of fiscal and monetary policies between countries, and mobilizing money for bailouts during crises.

There is a lack of global consensus about containing the negative impact of some countries’ monetary policies on the rest of the world, he said, a problem amplified by accelerating globalization.

As the U.S. dollar acts as a reserve currency, the Federal Reserve’s (Fed) monetary policy has the greatest spillover effects on other economies, and this can lead to abnormal capital flows, Zhou said. However, the Fed has repeatedly emphasized that it is institutionally responsible for the U.S. economy only, he noted.

In response, establishing a global mechanism to coordinate liquidity is needed, which can also help create liquidity to solve global problems, said Zhou.