By Luo Guoping and Flynn Murphy 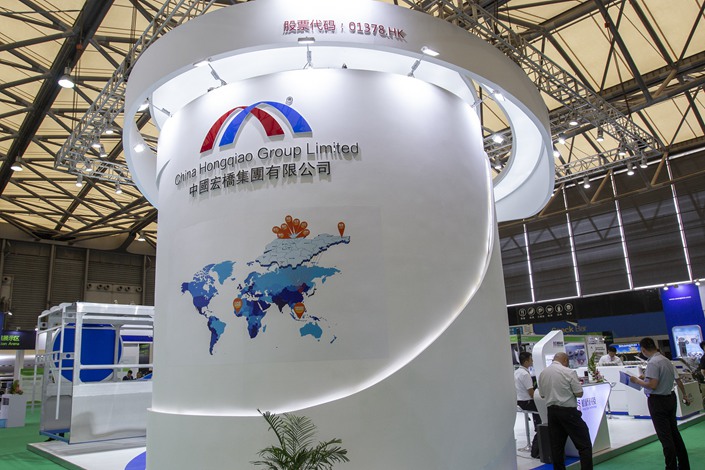 A domestic credit rating agency has downgraded nearly $1.5 billion worth of corporate bonds issued by a unit of China’s largest private aluminum smelter, in a possible early sign of trouble as its parent faces a mountain of debt set to come due.

The downgrade comes after a short-term borrowing splurge by the parent company, China Hongqiao Group, has left it with more than 21 billion yuan ($3.18 billion) in notes and bonds to pay off by June 2021 — 1,300% more than matured in the year to June 2020.

China Lianhe Credit Rating Co Ltd. downgraded the ratings of two bonds issued by Hongqiao subsidiary Shandong Weiqiao Aluminum and Power Co. Ltd. from its highest rating of AAA to its second highest, AA+, citing mounting debt pressure and coronavirus uncertainty, as well as sluggish aluminum prices and weakened demand for aluminum alloy products in the first half of the year.

The downgrade was all the more noteworthy due to the negative reputation domestic ratings agencies have gained in the past two decades by inflating their ratings to attract new business, since bond issuers are typically the clients that pay to have their debt rated. The government has tried to clamp down on the practice, including by allowing more competition from foreign ratings agencies.

The downgrade of Shandong Weiqiao’s bonds likewise sent a shudder through other bonds issued by the parent and its subsidiaries, amid questions about whether they would be able to fulfill their financial obligations. At the end of June, the parent company had short-term debts totaling 53.22 billion yuan set to mature by 2022.

The solution, according to one Hongqiao source, may be to rope in strategic investors. The company has also been stockpiling cash as it prepares to pay the piper, and held about 41 billion yuan in June.

Hong Kong-listed China Hongqiao is an integrated aluminum juggernaut with interests ranging from power generation and mining to aluminum smelting and production of alloys and value-added products.

The company held almost 180 billion yuan of assets with a liability-to-asset ratio of about 60% at the end of 2019, and made about 6.274 million tons of aluminum products that year, according to Lianhe Credit. The company’s operating revenue slid 3.6% and gross profit dropped 15.4% that year, but in the first three quarters of 2020, Hongqiao’s was able to increase its net profits some 44% to 6.81 billion yuan on operating income that was also up a whisker to 66.6 billion yuan.

Lianhe Credit described the company’s production and operations as “stable” and its cash flow as “abundant.”

Weiqiao Aluminum and Power’s rating remained unchanged at AA+. In response to the downgrade, the company pointed to healthy cash flow and improving aluminum prices, and said it is continuously exploring financing channels to improve its solvency.

China Hongqiao said it would not comment on the downgrade.