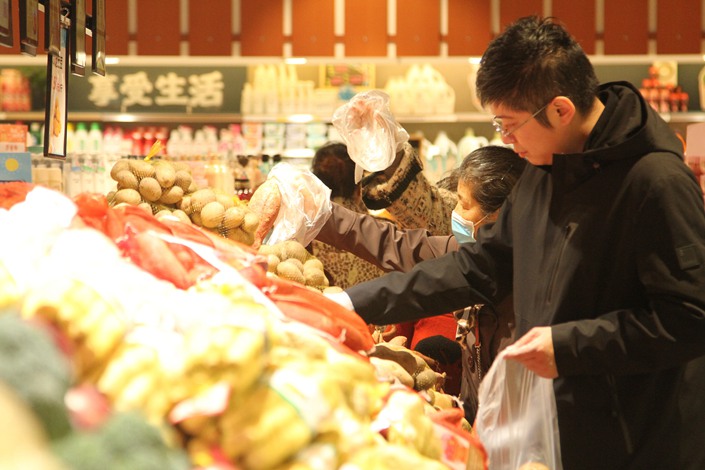 Residents shop at a supermarket in Xuchang, Henan province, on Oct. 31.

Western pundits wrongly call China closed off from the world. But it’s the pundits that can’t see beyond their own borders. They view rising Covid-19 cases across Europe and the U.S. as signs of a “new normal,” permanently altering societies — and impeding economies and markets. Yet here on the other side of the globe, China and other countries move closer to post-pandemic normalcy. What the pundits miss: The Middle Kingdom’s strong rebound is a big, bright, bullish sign for the rest of the world. Here’s why.

Back in March, I explained that because the coronavirus struck China first, China’s Covid experience offered a guide for what Western economies could expect. At that time, America’s and Europe’s economies were locked down but China was beginning to reopen. Chinese shipbuilders and automakers were quickly ramping up production. Domestic travel was bouncing back. Yet rather than looking to China as a leading indicator, Western observers warned Covid would trigger lasting economic gloom. Brick-and-mortar retail shops were doomed, they cried. The travel industry? Dead, for sure! Friends would no longer gather at bars or restaurants. Companies would abandon offices. Cities would become ghost towns.

Instead, the West has begun recovering — echoing China’s experience. After being bludgeoned this winter, U.S, GDP soared 33.1% annualized in the third quarter. Retail and food service sales have increased for five straight months and are now 7.1% above year-ago levels. The much-maligned travel industry is even showing some signs of a rebound. The average number of daily passengers passing through U.S. airport security checkpoints—below 110,000 in April—was over 825,000 in October. That’s a far cry from October 2019’s 2.3 million average, but it shows the nascent recovery is taking hold. In the eurozone, retail sales excluding motor vehicles have surpassed 2019 levels. Industrial production lags 2019 levels, but has risen for four straight months.

To those who looked to China as a guide last spring, these developments are no surprise. Now, China continues to hint at what comes next for the rest of the world — and it’s bullish news. Consider: Despite Covid-related weakness in the West, crude steel production has eclipsed 2019 levels. Why? China absorbed all the missing iron ore demand. One iron-focused multinational miner reported China accounted for almost 70% of its sales in the third quarter, up from less than 50% in 2019. It isn’t just steel. Overall, China’s imports rose 13.6% year-over-year in September. Chemical imports for making fertilizer rose 16.3%. Meat and meat products? Up 54.2% from a year ago. Pharmaceutical imports were up 7.0%, while clothing and accessories were 9.3% higher. Surging Chinese demand shows just how quickly the West’s appetite can rebound.

“Early on, many Westerners wrongly argued China's recovery was all about stimulus. Now, as retail sales are back above year-ago levels, the consumer boost helped GDP growth to accelerate and China moves closer to post-pandemic normalcy.”

China also shows how fast factories can ramp back up and resume overseas shipping, overcoming tariffs and the virus alike. Its exports were up nearly 10% year-on-year in September, boosted by big jumps in everything from industrial and office machinery to electronics to fabrics. Remember all those fears about Trump’s tariffs tanking trade? Didn’t happen! Overall industrial production rose 6.9% year-on-year in September, despite the winter’s record plunge.

Other Asian countries preview the global rebound, too. Vietnam’s GDP has already surpassed 2019 levels and its manufacturing is booming, with exports up 13.1% year-on-year in October. In South Korea, industrial production is 8% above year-ago levels, and GDP sits within 1.3% of where it was a year ago. But rather than see China and its neighbors as leading indicators, Western pundits continue to view them as anomalies — leading entirely because of more successful Covid responses. I won’t debate how various governments have handled the crisis, but it’s clear to me that timing is just as much — if not more — of a factor in the world’s uneven recovery. Asian nations implemented lockdowns or restrictions first and lifted them first, so they began recovering first—simple common sense that eludes pundits.

That puts China and several neighbors at a different stage of the recovery — closer to something like normalcy. Early on, many Westerners wrongly argued China’s recovery was all about stimulus, creating a two-speed economy in which heavy industry soared while consumption lagged. Now, retail sales — down more than 20% year-on-year in the January-February period — are back above year-ago levels. The consumer boost helped GDP growth accelerate in the third quarter to 4.9% year-on-year — not far from the country’s loose 6% full-year target, despite Covid having turned 2020 upside down.

Domestic travel, meanwhile, has zoomed since February. Hotel occupancy and airline passengers were at around 90% of 2019 levels as of August. During the National Day holidays, more than 630 million Chinese traveled domestically, spending some 467 billion yuan on tourism. Maybe you were one of them! In Hainan alone, tourists spent over 1 billion yuan at duty-free shops — almost 150% more than during Golden Week 2019. Yes, overall spending was roughly 30% below 2019 levels, but that’s a big improvement over the Labor Day holiday, when domestic tourism revenue was down 60% year-on-year. Then too, 2019’s Golden Week boom was supersized due to 70th anniversary celebrations, somewhat skewing year-over-year comparisons.

Other signs of strong discretionary spending abound. In its third-quarter earnings report, U.S. cosmetics firm Estée Lauder said sales in Chinese travel stores surged double digits. Elsewhere globally they were flat. Overall Estee Lauder said sales growth in Chinese brick-and-mortar stores hit double digits for the first time since Covid. Even in Wuhan, life is returning to normal, with reports that it’s tough getting a table at some of the city’s better restaurants.

The U.S. and Europe aren’t at this phase of recovery — yet. In America, pundits yelp that without another big government rescue package and stimulus spending, the U.S. rebound is doomed —echoing fears of a two-speed Chinese recovery. But the third-quarter GDP report debunks that theory. American consumer spending surged 40.7% annualized, coming within 2.5% of the four quarter of 2019’s record high — even though the government’s supplemental unemployment assistance expired July 31 and was only partially replaced. With Americans’ personal savings rate now more than double its pre-pandemic level, U.S. consumers are set to drive the recovery forward— just like Chinese consumers did.

That’s good news for everyone. As China’s recent strength shows, growth in one part of the world facilitates growth elsewhere — particularly if Covid flare-ups temporarily curtail production or consumption in one region or another. As a general rule, those who are strong help pull the weak along. As the West catches up to China on the Covid timeline, normalcy can — and will — return more broadly, as it has in China. Forward-looking markets understand that. They have been pre-pricing that since March’s low. Make sure you grasp that, too, or you’ll miss out on this new bull market’s continued rise.