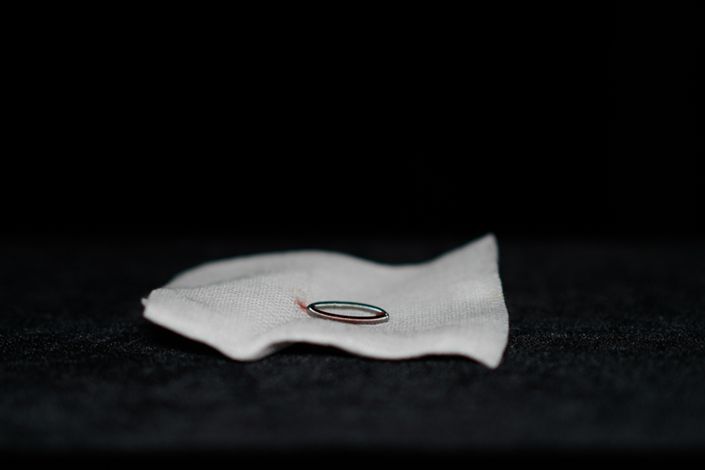 An IUD, a widely used contraceptive device in China, that has just been removed from the body. Photo: Cai Yingli/Caixin

When the two coils that had spent close to two decades in her body were removed, Lu Ying (pseudonym) said she felt reborn.

Lu, from Pujiang county in East China’s Zhejiang province, had the first of the intrauterine devices (IUDs) fitted after she gave birth to her only child in 1993, to prevent her from getting pregnant again and violating the one-child policy.

Six years later, she was told by village family planning officials that the first coil “didn’t work” and that she’d have to get a second coil inserted. Soon after, her health began to deteriorate, with menstrual bleeding around three weeks per month and the desperate need to urinate every two hours, which has spoiled her sleep for over a decade.

Around 300 kilometers away from Lu’s home, Shanghai resident Teng Youxia has also spent decades dealing with the impact of her IUD. Teng’s abdomen is distended, giving her the appearance of being heavily pregnant, and she has suffered fatigue, chronic pain and excessive menstrual bleeding. She attributes these problems to a botched IUD removal 22 years ago.

Coils became widely used to enforce the one-child policy from the early 1990s, after design improvements were touted as causing fewer negative side effects. Women who refused to have an IUD inserted after giving birth faced punishments which varied across the country and at different times. One common punishment would be denying the woman’s child the all-important “hukou” household registration document, thereby locking them out of accessing public services such as education and healthcare.

One of the factors behind the health problems of this pair, and many other women like them, is the specific design and purpose of the IUDs commonly used in China. Unlike in some other countries, where these coils have a lifespan of a few years, in China they are usually intended to permanently curb the fertility of mothers. To this end, they are also difficult to insert and remove, requiring a surgical procedure rather than being able to be simply pulled out by their strings.

Problems including the IUD expulsion, uterine perforation and inflammation are not uncommon, and can lead to serious mental and physical trauma.

Wu Shangchun, a birth control expert, told Caixin that many doctors and the women who have IUDs actually know little about them, which leads to problems in identifying complications and side effects.

In 1993, then 24-year-old Lu was fitted with a mandatory IUD. In 1999, when she went for her biannual health check with the family planning authority in her home village of Qiaoxi, she was told that her previous coil had “fallen out” and she would have to be fitted with a replacement.

Just a few months later, the bleeding started. At a check the following year, she asked if the coil could be changed or removed, but the staff refused, telling her that any health problems she was experiencing were not the fault of the coil.

However in 2017, at another health check, staff told her that there were two coils in her uterus — the first coil had not left her body before a second one was fitted.

While the county government offered her 20,000 yuan ($3,050) in compensation, Lu thought it an inadequate amount for 16 years of suffering and decided to take the government to court.

Teng had a different issue with her IUD, though it also had its roots in apparent medical error.

She too had a mandatory coil fitted by the family planning authorities of her hometown, Fanchang county in Anhui province, after giving birth in 1991. Side effects occurred immediately, including painful cramps and extended, heavy periods of menstrual bleeding. In 1998, she was told that the problems were due to the coil shifting several centimeters inside her body and that she’d have to have it surgically removed by the family planning authorities.

But after the surgery, her condition didn’t improve — it got worse.

Fifteen years later, a series of hospital tests in Shanghai showed that parts of the coil had remained in her pelvic region and that the removal had been botched. “Why didn’t the doctor in charge of the removal all those years ago inform me?” Teng asked.

In January 2014, surgeons attempted to remove the residue of the coil, but failed as the fragments had become too deeply embedded in her uterus. The next year, on the advice of her physician, Teng decided to have her uterus removed at Shanghai’s International Peace Maternity and Child Health Hospital. Teng says the surgeon removed her ovaries and cervix without her consent, leaving her incontinent, and that the problem of chronic bleeding remained. Later, she had to have yet another surgery on her bladder.

At this time, Teng asked Fanchang to officially recognize that she had complications arising from the IUD, but the government refused.

Lawsuits failed in finding a category

Teng and Lu have both tried to use legal means to find justice, though they have taken different paths despite the similarity of their cases. However, neither has had much luck.

Lu filed an “administrative procedure” lawsuit against the Pujiang government, under a law that allows individuals to sue the authorities for infringing on their rights. However, a court in the neighboring county-level city of Lanxi ruled in favor of the authorities, as it said she couldn’t prove that the insertion of the second IUD was involuntary. Moreover, the court ruled that the target of her complaint should have been her village family planning department, rather than the county government.

Lu appealed this sentence with the court at the prefectural city of Jinhua, which administers both Pujiang and Lanxi, but this was rejected. After several rounds of negotiation, she received 120,000 yuan from her village. While this was more than the government’s first offer of 20,000 yuan, it was far less than the 1.3 million yuan she had wanted.

Teng sued the Fanchang family planning authority, health commission and the Shanghai hospital which performed surgery on her for medical malpractice. However, the bureaucratic stumbling block here was whether or not the procedures carried out in the name of family planning could be classified as a form of medicine, and therefore whether or not they were covered by laws on medical malpractice.

In 2018, the court of Wuhu, the city which administers Fanchang, ruled that the malpractice law was not applicable in her case, and that moreover she couldn’t prove that the metal fragments in her uterus were from the IUD. Her appeal to the Anhui provincial court was rejected.

It is far from unusual for IUD-related cases to be rejected because the mingling of government and medical elements mean they don’t easily fit into any existing legal category. According to Caixin’s research, most cases of women suing the authorities over their IUDs have been rejected on such categorization grounds.

Even when cases are accepted, the burden of proof is particularly onerous. Such lawsuits usually require the participation of family planning experts who can clarify any relevant evidence – such as the metal fragments in Teng’s body. However, judicial authentication agencies – official bodies which assess evidence before it can be submitted in a lawsuit – don’t have staff with expertise in family planning, meaning it’s very difficult to submit evidence of harm in these cases, said Zhang Wensheng, a lawyer who previously worked at medical institutions.

In addition, these kinds of lawsuits take a long time but usually end in little reward. Lots of women cannot bear fighting for three to five years - in the end they give in and accept token compensation.

These challenges persist despite official recognition that IUDs can cause serious health problems. Documents on this issue were released in 1990 and 2011, which classify the common types of side effects and explain how they should be identified by officials at different levels. Women who are identified as having related complications should be provided with free treatment, the documents say.

Despite this, experts say that complications are still rarely identified through this process, and often free treatment isn’t made available even to those women who can prove they have suffered health problems due to their IUD.

Wu explained that many places still expect women to pay for any treatment related to complications from their IUD.

Lu says she isn’t satisfied with the paltry compensation she received, but has no idea what to do other than try to make the best of her life and put the pain she suffered for nearly two decades behind her.

Teng is less resigned, and is continuing her fight to hold someone accountable, though she feels bad for asking her family to help pay her medical and legal bills.