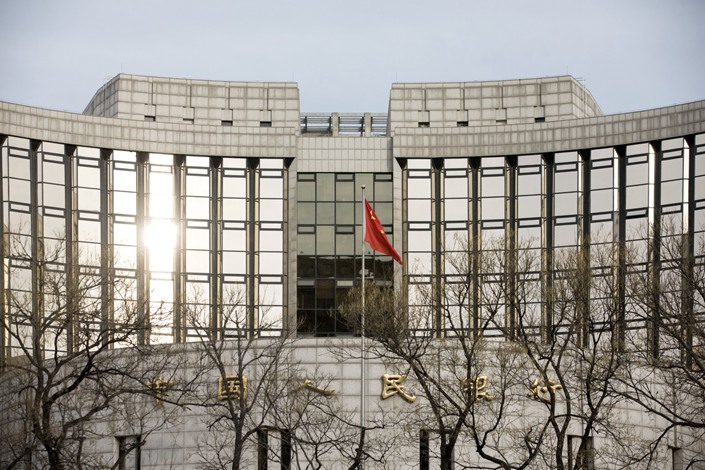 A Chinese flag flies in front of PBOC headquarters in Beijing in January 2019. Photo: Bloomberg

(Bloomberg) — China’s central bank remains on course to taper its emergency support even as a string of defaults by government-linked companies sends tremors through the credit markets.

Officials have been preparing investors for the possibility of withdrawing some of that stimulus as the economic recovery picks up pace. While a surge in market interest rates this week following the defaults appears to have complicated that plan, economists say it won’t push the People’s Bank of China off its policy course.

Investors were rattled this week when a top Chinese chipmaker and a major car manufacturer were the latest to join a growing list of companies to default. A Chinese residential developer said Thursday it failed to repay investors who requested early redemptions. The defaults have triggered a sell-off in the corporate bond market and hurt demand for government assets.

While those tensions are a potential hurdle, economists say the PBOC is participating in an effort to enforce discipline in the credit market by allowing some state-owned companies to default. Officials have signaled that the economy’s steady rebound from depths plunged early in the pandemic crisis will allow it to unwind at least some of its stimulus measures.

This year the PBOC has cut the amount of money banks have to keep in reserve, lowered interest rates on loans from the central bank and provided ample liquidity to commercial banks and financial markets.

But the central bank has avoided the aggressive and broad stimulus deployed by peers in the U.S. and Europe since the pandemic began, meaning it has less to do in order to wind that support in again.

Liu Guoqiang, vice governor of the People’s Bank of China said earlier this month that an exit is likely “sooner or later” and will be driven by the recovery. Former Finance Minister Lou Jiwei said last week that it was time to study an orderly exit of loose monetary policies.

Economists said stimulus withdrawal could take the form of shifting cheap credit facilities to pricier ones or trimming special re-lending instruments. The PBOC on Friday left its one-year loan prime rate — a benchmark for banks’ corporate lending rates — unchanged for a seventh straight month at 3.85%.

The nation’s economy remains the world’s only major one tipped to grow this year as gauges of industrial production, investment and consumer spending all point toward an expansion that remains on track.

That opens a window to enforce a shake-up in the credit markets, according to Ding Shuang, chief economist for Greater China at Standard Chartered Plc in Hong Kong.

“Imposing financial discipline is never easy,” he said. “One can argue there is no better time than now to remove the implicit guarantee, when the economic recovery gains pace and the renminbi faces appreciation pressure amid capital inflows.”

While the defaults look striking, the overall number remains below last year and it’s unlikely regulators will allow systemic risk to spread.

To be clear, the PBOC’s exit strategy is expected to be gradual with relatively cheap funding continuing to be rolled over for banks and businesses. There’s little prospect of a near-term interest rate hike.

“Authorities will adopt a measured approach to exiting easy policy,” he said.

The Communist Party in October released initial details of a new five-year economic plan and signaled a goal to double gross domestic product in 15 years. The stress in the credit markets, so far at least, doesn’t challenge those ambitions.