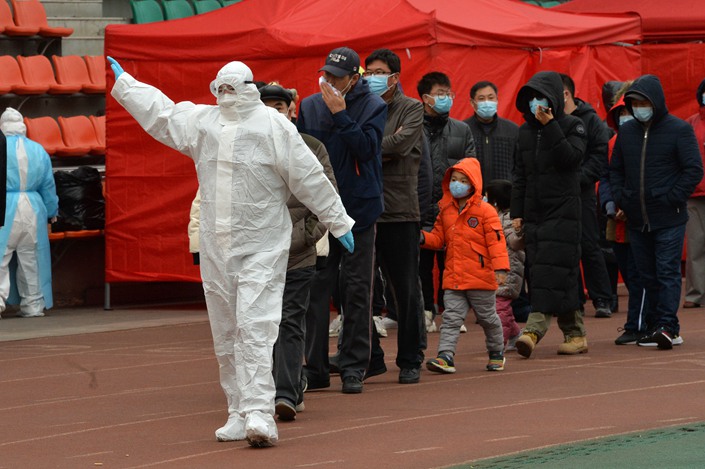 Mass testing is carried out in Tianjin's Binhai New Area on Nov. 21.

China confirmed two more locally transmitted Covid-19 cases on Monday, both of which are connected to previous infections among freight workers in the eastern city of Shanghai.

The figures by the National Health Commission (NHC) came after a total of 10 locally transmitted infections were announced over the weekend in Shanghai, the northern municipality of Tianjin, and North China’s Inner Mongolia autonomous region.

One of China’s foremost infectious disease experts, Zhang Wenhong, said Sunday that the outbreaks were “within a controllable scope” and there were no indications of large-scale transmission.

Chinese health authorities continue to battle a number of cases linked to cargo handlers at several of the country’s ports, who are believed to have contracted the novel coronavirus, which causes Covid-19, from touching the exterior packaging of imported cold and frozen foods.

According to a notice (link in Chinese) on the website of the Shanghai Municipal Health Commission, one new case, a 46-year-old man surnamed Cao, is the colleague of a freight worker at Pudong International Airport who was diagnosed with Covid-19 on Friday.

The other new case is a 30-year-old woman surnamed Zhang whose husband was previously diagnosed on Saturday, the notice says.

A separate post (link in Chinese) on the same website stated that Pudong Airport had begun testing “all relevant personnel,” including all freight workers, for the virus. Photographs showed dozens of disease control workers in white personal protective suits shepherding airport staff through a car park where the tests were conducted.

Shanghai authorities have designated the district where the airport is located a “medium-risk” area, the middle category in a three-tier system.

Authorities in Inner Mongolia have also stepped up (link in Chinese) disease control measures amid a spate of infections in the cities of Hulunbuir and Manzhouli, both of which lie on the border with Russia.

Chinese health officials have stressed that the local flare-ups do not pose a significant threat to public health.

Writing on his Weibo microblog on Sunday, Zhang Wenhong, the head of the Center of Infectious Diseases at Huashan Hospital of Fudan University in Shanghai, said the outbreaks were under control and “there has been no continuous second-generation community transmission” of the virus.

“Although disease control strategies appear to vary by locality, in fact the differences between them are insignificant,” he wrote.

Overall, the Chinese mainland logged (link in Chinese) 11 new Covid-19 cases on Monday, nine of which were imported infections originating from outside of China. The total represented a decline of six on the previous day.

The country’s overall case count now stands at 86,442, according to the NHC. The death toll remained unchanged at 4,634.