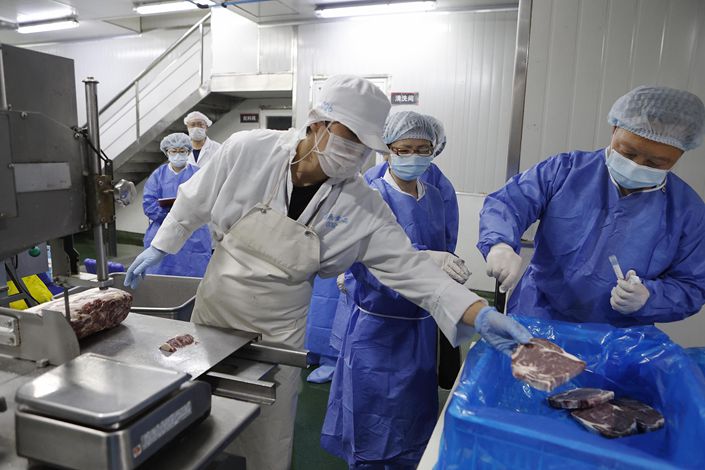 Disease control authorities in the eastern Chinese city of Nanjing said Wednesday they had intercepted a shipment of imported frozen meat whose exterior packaging was contaminated by the novel coronavirus.

The discovery comes days after the central government issued new rules on disinfecting consignments of frozen and refrigerated foods in response to a handful of Covid-19 infections among the country’s cargo handlers.

Samples from the packaging of frozen beef imported from Argentina tested positive for the coronavirus, according to a notice posted on a Weibo microblog affiliated with Nanjing’s Communist Party committee.

The products “had not yet entered the market,” the notice said (link in Chinese), adding that all staff at the cold storage facility where the shipment was being held had tested negative for the virus, as had their close contacts.

The incident is the latest example of frozen foods with tainted packaging turning up on Chinese shores. Scientists believe the novel coronavirus, which causes Covid-19, can remain active for long periods in the subzero temperatures in which so-called “cold chain” foods are typically stored and transported.

According to the notice, the batch of beef was initially shipped to Shanghai’s Yangshan Port from Argentina, which is currently recording thousands of new coronavirus cases per day.

The consignment was subsequently brought north to Nanjing on Monday, whereupon it was stored at a site operated by a local meat products firm. Details of the companies that handled its journey from Shanghai were not immediately available on Thursday.

China tightened rules on imported frozen foods on Monday, ordering all shipments from overseas to undergo “thorough preventative sterilization” before being handled by customs, transportation, storage, wholesale or retail workers.

The decision came after several cargo handlers in cities including Shanghai and Tianjin recently contracted Covid-19 after touching frozen products brought in from overseas. Other outbreaks in the capital Beijing and the northeastern port cities of Dalian and Qingdao have previously been attributed to similar causes.

The Chinese mainland recorded (link in Chinese) one new locally transmitted Covid-19 infection on Thursday, according to the National Health Commission (NHC). The case is believed to be a previously identified Tianjin truck driver who was initially asymptomatic. China does not count people as confirmed cases until they start displaying the signs of Covid-19.

The mainland also logged 14 imported infections, bringing the total case count to 86,299, according to the NHC. The death toll remained the same at 4,634.