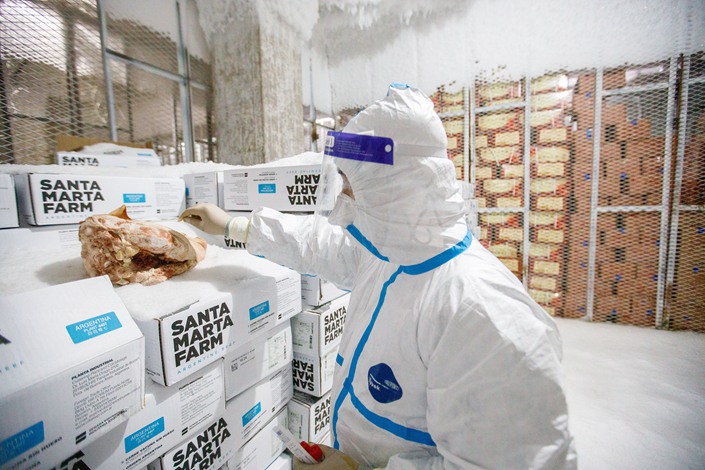 Frozen products are tested for coronavirus in Tianjin on Nov. 9.

China recorded one new locally transmitted case of Covid-19 on Tuesday, according to the National Health Commission, as a senior disease expert urged the public to stay calm about the risk of infection.

The latest case involves a man from the eastern province of Anhui who previously handled cargo at the same Shanghai airport as another man diagnosed a day earlier, according to a statement by the local health body.

On Wednesday, the government of the northern city of Tianjin said a truck driver who previously tested positive for the coronavirus, which causes Covid-19, had subsequently developed symptoms of the disease, making him a confirmed case under the Chinese counting system.

Authorities in Shanghai announced (link in Chinese) no new locally transmitted infections on Tuesday, the latest day for which figures are available. Experts have played down the risk of new outbreaks, with Zhang Wenhong, a top infectious disease expert in Shanghai, calling on the public “not to let the occurrence of sporadic cases affect normal life.”

The health commission of Fuyang, a city in northwestern Anhui, said (link in Chinese) in a notice Tuesday that the province’s new case is a 50-year-old man surnamed Lan who works in Shanghai and helped move freight at Pudong International Airport before returning to Fuyang by bus on Thursday.

Prior to his diagnosis, Lan also rode a local bus in Fuyang and took his grandson to a county-level hospital, the notice said, adding that authorities had undertaken disease control measures at all of the places where Lan had travelled and had brought him to a larger hospital in the city for treatment.

As of 11 p.m. Tuesday, health officials had identified 34 of Lan’s close contacts and tested 17 of them for the novel coronavirus, according to the announcement. Of the tests, 16 had come back negative and one result is pending.

Lan is the third cargo handler in four days to be diagnosed with Covid-19, following the Shanghai case and an unrelated infection in Tianjin.

Chinese disease control officials have stressed that the new cases do not pose a significant risk to public health. In an op-ed (link in Chinese) for Caixin on Tuesday, Zhang Wenhong, the director of the infectious diseases department at Huashan Hospital in Shanghai, wrote that the city’s case was “not serious” and was “unrelated” to the Shanghai World Expo, a recently concluded international trade fair that attracted more than 1 million people.

Zhang’s comments came as the deputy director of the Chinese Center for Disease Control and Prevention, the country’s top disease management body, said China would “very likely prevent” an upsurge in coronavirus infections this winter if it continues its current policies.

As of Tuesday, the total number of Covid-19 cases recorded on the Chinese mainland was 86,284, according to the National Health Commission. The death toll remained unchanged at 4,634.