By Matthew Walsh and Jia Tianqiong 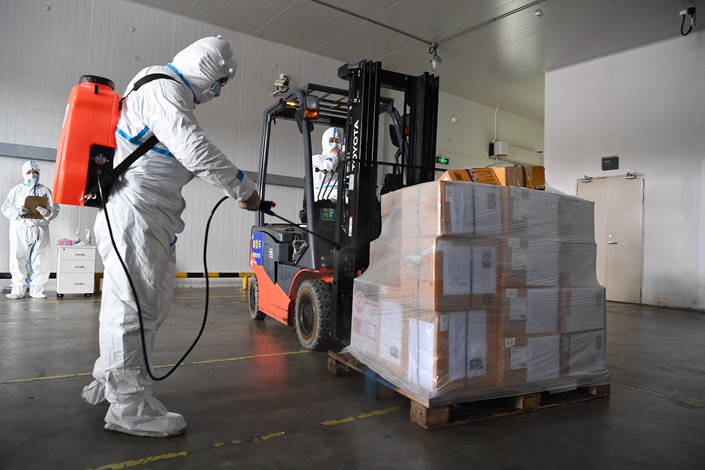 A worker disinfects the outer packaging of frozen food products in Shanghai on Oct. 29.

China’s transport ministry has issued further guidelines on how to ship imported chilled and frozen foods after several consignments were found to be contaminated by the novel coronavirus.

Two notices issued by the ministry on Friday respectively outlined the technical specifications for disease control work among port and other frontline transport workers, and for keeping so-called cold chain goods virus-free as they move along the country’s roads and waterways.

The regulations follow a series of coronavirus infections among cargo handlers and logistics workers who had recently come into contact with imported frozen food products.

Scientists think the virus, which causes Covid-19, can survive for long periods on the exterior packaging of cold chain goods even when exposed to subzero temperatures during transport.

The regulation (link in Chinese) governing disease control among frontline workers requires port operators to set up body temperature scanners and issue masks, gloves, goggles and other personal protective equipment to all personnel.

It demands that the operators limit interactions among staff members and subject them to frequent nucleic acid tests (NATs), a common tool for detecting coronavirus infection. Operators must also ensure they keep detailed records of arriving and departing shipments, test consignments for the presence of the virus, and report them to the port administrator.

The circular (link in Chinese) on preventing the virus from spreading through the cold chain — a sprawling system designed to transport products at low temperatures — orders logistics companies to implement “dual controls for goods and people” in accordance with guidelines issued by the State Council, China’s cabinet, and the transport ministry.

Several localities within China have issued their own rules, with Shanghai, home to the world’s busiest container port, requiring (link in Chinese) all “high risk” imported cold-chain food shipments to undergo NATs and disinfection before being stored, processed or sold in the city.

China has moved to tighten oversight of certain food imports following infections among several cargo workers and the discovery of the virus on a number of shipments.

Earlier this month, health officials in the northern city of Tianjin recorded Covid-19 infections in two men believed to have previously come into contact with a tainted consignment of German pork knuckles.

Similar case histories have previously emerged in the capital Beijing as well as the cities of Shanghai, Qingdao and Dalian.

The Chinese mainland recorded (link in Chinese) 15 new cases of Covid-19 on Tuesday, all of which were imported, according to the National Health Commission. The country’s total number of infections now stands at 86,361, including 4,634 deaths.