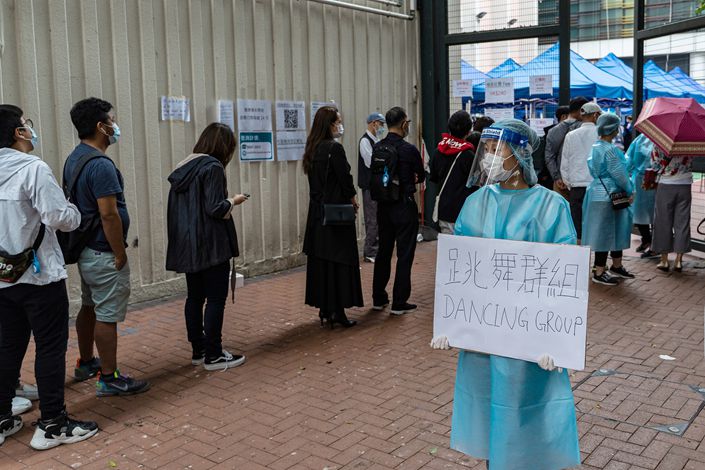 People queue for coronavirus testing in Hong Kong on Nov. 23.

The Hong Kong government has tightened social distancing measures to contain a new wave of Covid-19 cases after recording its largest outbreak of infections linked to cluster of dance clubs.

The city reported 73 new Covid-19 cases on Monday, 50 of which were linked to dance club patrons in 21 locations and taking to 132 cases the total number of infections attributed to this group activity.

On Tuesday, citing unnamed sources, Hong Kong’s official radio RTHK reported that an additional 83 new coronavirus victims in the city were expected to be confirmed by the government. It was not immediately clear how many of these were linked to the dance clubs.

Sources told RTHK the government had decided that bars and nightclubs must close again. In April, karaoke venues, nightclubs and bars were first closed for about a month.

Chief Executive Carrie Lam also told reporters Tuesday the government plans to force restaurants and other premises to sign up for its coronavirus contact-tracing app. She said it could eventually become mandatory for venue customers.

Further measures related to public gatherings, face mask wearing, and shutting down indoor activities are expected to be released by the government.

The sudden surge in Covid-19 cases pushes the city into its fourth wave of the deadly pandemic.

A direct outcome is the postponement of a Hong Kong-Singapore “travel bubble” which was set to begin operating on Sunday, allowing quarantine-free air travel between the two Asian hubs.

There are 21 dance clubs involved in the latest Covid-19 outbreak cluster, including a recently added seven clubs. Many of them are dance studios but others also offer dining. They have all been forced to undertake Covid-19 testing of patrons and staff.

Sparse transmission among friends and family members has already been detected during the patients’ incubation or infectious periods, said Chuang Shuk Kwan, director of the Center for Health Protection.

It has been difficult to assess how many people from the dance club cluster have been tested, but by Sunday 3,000 nucleic acid tests had been done at four community testing centers, yielding 36 confirmed cases, according to Chuang.

In response to the city’s alarming spike in such a short time, the Hong Kong Hospital Authority has decided to reopen from Nov. 25 the AsiaWorld-Expo facility as a holding venue for stable or young patients to ease the burden on public hospitals. It also had been deployed in August during Hong Kong’s third wave of Covid-19.

Newly confirmed patients also will be accommodated in the makeshift hospital and will be reassigned later to different facilities based on their condition. The Hospital Authority will initially provide 900 beds and add another 1,000 if needed.

The occupancy rate of isolation beds and wards in Hong Kong public hospitals currently stands at 64.9% and 70.9%, with around 1,000 beds and 600 wards in use.