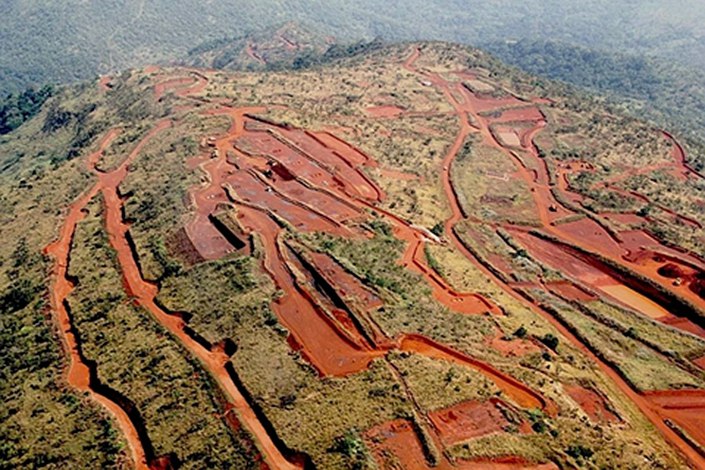 The Simandou project in the West African state of Guinea holds the the world’s largest known untapped reserve of iron ore.

Efforts to develop the world’s largest known untapped iron ore reserve in West Africa have stalled once more, with a top engineering consultant on the project telling Caixin the Chinese-Singaporean consortium that bought into the Simandou project in June has not substantially invested in it.

As iron ore prices climbed this year, the SMB-Winning consortium bought into the Guinean project that is expected to be able to produce as much as 150 million tons of iron ore a year, equivalent to 7% of global production in 2019.

Their buy-in has not yet provided much new momentum to a project that has seen little progress over the past two decades, mired in complex political and mining rights disputes, concerns over costs and pressure from industry rivals.

Since SMB-Winning secured the northern half of the project’s four blocks of mining rights in government bidding this June, it has released a steady stream of press releases about its progress there. Executives were sent to inspect the new blocks in October, environmental impact work was done, and in November the company inked deals with the Guinea government regarding construction of ports and railways.

But with more than 10 stakeholders in the project including the Chinese and Guinean governments, pre-construction work will take a long time, and the consortium has yet to put in any “substantial investment,” according to Li Xinchuang, an expert at the China Metallurgical Industry Planning and Research Institute.

The remaining two southern blocks are controlled by Rio Tinto and a group of Chinese investors led by steelmaking giant Baowu. Rio Tinto has been a stakeholder since 1997, and the Chinese partners joined in 2010 when a Chinalco-led group acquired a stake in the Rio Tinto unit associated with Simandou. That stake was taken over by Baowu in June.

The project is massive in scale: Rio Tinto in 2016 estimated that tapping its blocks could require investment of $18 billion, and SMB-Winning expects it would need to spend $14 billion on the northern two blocks.

Rio Tinto is also in touch with multiple companies seeking to share infrastructure, the company’s CEO Jean-Sébastien Jacques said at a press conference on Monday.

Among those involved, Li said the Chinese and Guinean governments are most motivated to push things forward, and best positioned to help myriad participating banks and market buyers reach consensus on details. But he added that such coordination would not be easy. Operators of all four blocks will need to cooperate for the project to make progress, Li said, and should take political factors into consideration to reduce risks.