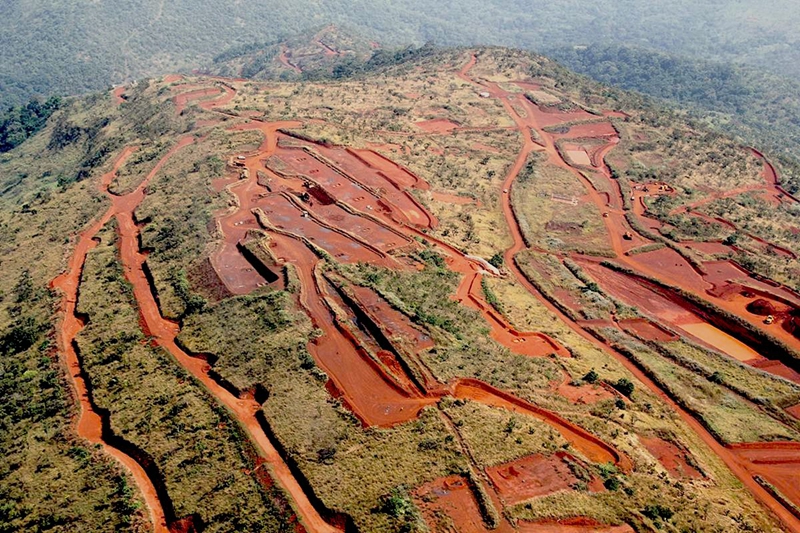 Simandou in southwest Guinea is considered to be the world’s largest, highest-quality iron ore deposit.

Simandou, a 110-kilometer range of hills deep in the hinterland of Guinea in Western Africa, boasts the world’s largest untapped iron ore reserves. They could reshape the global supply chain of the critical ingredient of steel, the world’s second-most traded commodity behind crude oil.

The rich assets have lured global investors, especially from ore-thirsty China, but pulling the mineral out of the ground has turned out to be a thorny challenge with entangled interests and risks stemming from technical, capital and political uncertainties.

It is considered the world’s largest, highest-quality iron ore deposit. Some industry experts project it could produce as much as 150 million tons of iron ore a year, equivalent to 7% of global production in 2019. Developing the deposits could save China, the world’s largest steelmaking country, billions of dollars a year.

But building the necessary infrastructure in Guinea, which ranks 160th by per capita GDP of 186 countries according to the International Monetary Fund, would also cost billions of dollars. To make the Simandou project operational would require railway and port construction amounting to the largest infrastructure project ever in Africa. Investors have been reluctant to sink that kind of money into Simandou because of the risk that prices will plunge.

The Simandou project has largely stalled over the past two decades, reflecting political complexity, mining rights disputes, concerns over costs and pressures from industry rivals. Discovered in the 1990s, the Simandou deposits hold more than 8.6 billion tons of iron ore with an average content of 65% iron, according to Guinea’s National Institute of Statistics.

“The reserve of Simandou is so rich that one can get minerals with a simple shovel,” a mining industry investor said.

The Simandou project could maintain a stable 7% share of global iron ore supply in the coming decade if it reached full capacity, giving it the power to influence global pricing, said Andrew Gadd, chief iron ore analyst at British commodity consultancy CRU. It could threaten some high-cost suppliers such as those in Canada, Brazil and South Africa, Gadd said.

In Australia, Simandou is known “the Pilbara killer.” Australia, the world’s largest iron ore exporter, produces more than 90% of its ore exports in the western region of Pilbara. Anglo-Australian mining giant Rio Tinto Group is a major stakeholder in the Simandou project since 1997 but has moved slowly to develop the project.

Chinese investors are among the main forces pushing the project forward as a new source of iron ore that could bring down prices for China’s steel mills. In 2019, China imported more than 1 billion tons of iron ore, 70% of the global supply and 80% of the country’s total demand. About 80% of China’s iron ore imports come from the four largest mining companies — Brazil’s Vale S.A. and Australia-based Rio Tinto, BHP Group Ltd. and Fortescue Metals Group.

In the first seven months this year, China imported 660 million tons of iron ore, up 11.8% from a year ago, official data showed. Demand has rebounded as the domestic outbreak of Covid-19 wanes and the government’s pro-growth, infrastructure push drives up steel consumption.

Heavy reliance on foreign supply makes Chinese steelmakers especially vulnerable to iron ore prices. Every $10 increase of the price of a ton of iron ore will lead to an extra $10 billion of spending by China every year, analysts estimate.

Despite the pandemic, iron ore prices have continued rising this year, touching a six-year high on Aug. 19 of $128.80 a ton and hovering at $120 since then.

“If Simandou starts operation, it could bring a drop of global iron ore prices by $40 to $50 a ton,” a steel industry analyst in China said.

Since May, Baowu has been trying to lead a consortium of steelmakers to invest in Simandou and break the development logjam. Baowu plans to set up a $6 billion investment fund consisting of steelmakers and financial investors to develop Simandou, Caixin learned.

But the Baowu project is no sure thing. Chinese investors including state-owned aluminum giant Aluminum Corp. of China Ltd. (Chinalco) tapped into the project years ago with little progress to show for it.

Chinese companies have a poor track record of investing in foreign mining. The painful example is the Sino iron project in Australia. After Chinese state-owned conglomerate Citic Ltd. paid $450 million for 25 years of mining rights to the iron ore deposit at Cape Preston in 2006, it quickly turned into a money pit because of repeated production delays and skyrocketing investments.

Simandou “needs a sophisticated dealmaker to coordinate various parties, to share interests and risks,” a senior energy industry investor said. Without the capability to get all parties to act together and figure out a sustainable business model, the development of Simandou will remain out of reach, the investor said.

Mining rights to Simandou have been split into four blocks, none of which has yet been developed. The first two blocks in the north are owned by SMB-Winning, a consortium backed by Singaporean and Chinese companies, while the No. 3 and 4 blocks in the south are controlled by Rio Tinto and a group of Chinalco-led Chinese investors. The Guinean government holds 15% in each of the two parts.

Chinalco and Chinese partners entered Simandou in 2010 by acquiring a 39.5% stake in Simfer, a Rio Tinto unit operating blocks 3 and 4. Chinalco is the largest single shareholder of Rio Tinto with a 10.3% stake.

But development of the blocks stalled in following years, leaving huge costs for investors. A company document seen by Caixin showed that Simfer invested more than $3.7 billion in infrastructure and mining facilities in Simandou. In 2015 and 2016, Rio Tinto wrote off nearly $2.3 billion of losses from the project. Simfer staff working on the Simandou project has been slashed to dozens from around 1,000 before 2016.

Chinalco and partners paid $1.35 billion for the stake in Simfer. A company financial report showed that Chinalco spent $15.5 billion as of the end of 2019 on Simfer and affiliated companies.

Industry analysts said they think Rio Tinto’s slow progress on the Simandou project reflects a strategic decision to focus on cheaper development in Australia, and the company doesn’t want new supply to press down market prices.

In reply to a Caixin inquiry, Rio Tinto said Simandou will provide a good supplement to ore supplies from Australia and Canada to meet strong demand for high-quality iron ore from China and other markets.

Rio Tinto was the first foreign investor licensed to explore Simandou in 1997. In 2006 the company won 25 years of mining rights for all four blocks with an option to extend. But no sustained work has been done on the sites. In 2008 the Guinean government forced Rio Tinto to relinquish its rights to the northern two blocks to an Israeli company, BSG Resources. But BSG’s purchase of the mining rights was controversial and was voided in 2019 by Guinea’s new government, citing corruption. In November that year, the government relaunched bidding for the two blocks, and SMB-Winning became the winner.

Sources close to the matter said the Guinea government hoped to pressure Rio Tinto into making progress in Simandou by inviting in the new investors. In June, SMB-Winning signed a framework accord with Guinean authorities and agreed on a timetable leading to commercial operations within 74 months after signing.

But several industry insiders said they are doubtful of SMB-Winning’s ability to raise enough funds to support the development. Shandong Weiqiao, with the strongest balance sheet among the shareholders, has a debt-to-asset ratio of more than 60%, restricting its capacity to tap new credit, they said. SMB-Winning contacted some Chinese banks for potential loans, but most lenders showed little interest, sources said.

The Simandou project is strategically valuable to China as it would diversify the country’s iron ore supply and give it greater bargaining power in price setting, said Lu Guangming, an analyst at CRU.

The four iron ore giants — Vale, Rio Tinto, BHP and Fortescue Metals — accounted for nearly half of 2019 global iron ore production of 2.1 billion tons. They have the major say in settling global prices.

Heavily reliant on imports, China has accepted almost every price increase by the four major suppliers since 2003 no matter how the pricing mechanism was changed, analysts said. The country has more than 300 steel mills, but their combined interests in foreign iron ore reserves amounts to only 65 million tons a year, or less than 10% of annual ore imports, according to the Metallurgical Industry Planning and Research Institute.

The Simandou project could become a game changer for Chinese steel mills. Caixin learned that Baowu’s proposed $6 billion investment would put $4.5 billion into the southern blocks and $1.5 billion into the northern blocks. Under the Baowu plan, 15% of the fund would come from Baowu, 35% from other steelmakers, 25% from the sovereign wealth fund, 10% from other institutional investors and 15% from infrastructure investors.

Baowu Chairman Chen is very enthusiastic about the Simandou investment and wants to push it forward, said a person close to the company.

But the plan is still at an early stage, and many Chinese steelmakers are hesitant to take part because of different concerns over iron ore supply, a steel industry professional told Caixin. Meanwhile, financial investors shy away from the long investment period and related uncertainties, a fund manager said.

Even if Baowu’s plan wins supports from other investors, it will remain a major challenge to negotiate a way to work with the current project shareholders, analysts said. A person close to the matter said Baowu hopes to persuade Rio Tinto to sell part or all of its Simandou stake.

Getting the minerals out of Guinea’s mountainous hinterland and transporting the ore to China will be a challenge requiring massive investment in infrastructure and logistics, the investor said.

The Guinean government is seeking to leverage the Simandou project to expand domestic infrastructure, demanding construction of a 650-kilometer Trans-Guinea Railway and a deep-water port as well as supportive facilities. This would mean a huge additional investment for Simandou developers. A study by Rio Tinto before 2016 showed that overall investment in block 3 and 4 could amount $18 billion. A preliminary study by Baowu projected $15 of billion investment for the two blocks, while SMB-Winning estimated $14 billion of spending for the other two blocks.

Such massive construction also means a longer investment period. Analysts said it could take as long as eight years for Simandou to complete construction and start delivery.

A greater challenge would come from market response after Simandou commences production.

Average production cost at Simandou might range between $35 and $40 a ton, compared with $15 to $20 a ton in Australia, making it more vulnerable to price wars, analysts said.

“It is almost certain that the four mining giants will cut prices after Simandou starts operation to kill it,” a fund manager said.

The financial institution source said considering the complexity of the Simandou project, it will need to be pushed forward by state-level coordination and planning. However, another source said authorities haven’t shown any interest in offering state backing to the Simandou project amid concerns over domestic steel industry overcapacity.