Liu He Calls for China to Get Technologically Self-Reliant, Fast 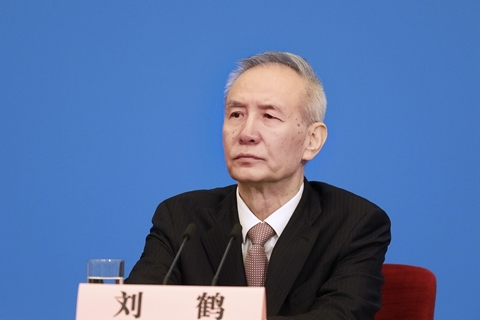 Chinese Vice Premier Liu He has called for China to move faster toward becoming technologically self-reliant, a goal that will play a decisive role in the country’s economic development agenda for the next 15 years.

In an article (link in Chinese) published Wednesday in the People’s Daily, the flagship newspaper of the Communist Party, Liu identified innovation and technological self-reliance as keys to China’s “dual circulation” strategy, a crucial part of the draft proposal of the 2021-2025 Five-Year Plan and long-term development targets through 2035.

In the “dual circulation” strategy, policymakers have put greater importance on developing domestic supply chains, especially for high-tech products, and tapping the potential of the domestic market to drive economic growth in the future. Policymakers have justified the strategy by citing changes in the “external environment,” presumably a reference to U.S. bans on selling American technology to some Chinese firms, as well as the rising trends of antiglobalization, populism and trade protectionism in some Western countries.

China should change its development strategy because its economic development has entered a new phase, he said. With per capita GDP surpassing $10,000, the domestic demand structure is significantly different from before.

The major pain point in China’s economy still lies on the supply side, as the supply structure has not been able to adapt to the changes in demand, he added, urging an innovation-driven, high-quality supply side that can drive and create demand.

Some analysts have said that China will make building a domestic supply chain for semiconductors one of its priorities. “Self-reliance in semiconductors is seen as particularly crucial, given the current dependence on U.S.-made chip-design tools and patents as well as critical manufacturing technologies from U.S. allies,” Louis Kuijs, head of Asia economics at research firm Oxford Economics Ltd., wrote in a report earlier this month.

New-generation information technology is one of the high-tech industries highlighted in the party’s new Five-Year Plan proposal. Other industries include biotechnology, new materials, and aerospace equipment.

Read more
In Depth: China Chip Sector Has the Money, Now It Just Needs the Workers

Policymakers have also pledged to stick to opening-up. Domestic circulation doesn’t mean self-isolation or abandoning international division of labor and cooperation, Liu said, adding that China should adhere to a dual circulation featuring openness and cooperation, and connect closer with the rest of the world.