China Reveals More About Its Economic Goals for Next 15 Years 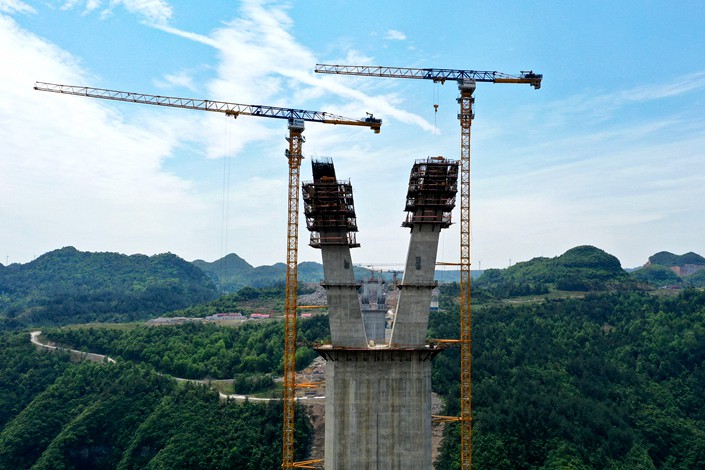 Constuction work is carried out on Duhua bridge in Longli County, Guizhou province, on April 29.

China unveiled more details (link in Chinese) of its plans for the country’s economic, social and political development over the next 15 years, fleshing out a broad framework agreed at a key meeting of the ruling Communist Party’s top officials last week.

The full text of the proposal decided at the fifth plenum of the 19th Central Committee of the ruling Communist Party, mapping out goals for the 2021-2025 Five-Year Plan (FYP) and longer-term targets and priorities through 2035, was released by the Central Committee along with an explanation by President Xi Jinping that highlighted some of the key themes such as high-quality development, the dual circulation strategy, and specific targets the party wants the country to achieve.

Uncertainties and risks stemming from the Covid-19 pandemic and geopolitical tensions have prompted China’s policymakers to downplay the importance of rapid growth. In his explanation, Xi emphasized a greater focus on perfecting the country’s economic structure and the quality of growth in the strategy for medium- and long-term development.

The proposal does not give any numerical targets for expansion in GDP for the FYP, an indicator that has been heavily emphasized over the past 20 years, but it does provide some signals about the rate of growth the leadership believes the economy can sustain over the next 15 years.

“It is ‘completely possible’ for China to reach the current standard for high-income countries by the end of the 14th Five-Year Plan period and to double total economic output or per capita income by 2035,” Xi said in his explanation (link in Chinese) issued by the state-owned Xinhua News Agency. He didn’t rule out setting specific targets for the FYP, noting that “when preparing the ‘Outline’ of the plan, corresponding quantitative targets can be put forward on the basis of careful calculation.”

The 14th FYP will be presented to the country’s top legislature, the National People’s Congress (NPC), for approval at its annual meeting that usually takes place in March.

“We view the 2021-25 goal as fully achievable but the 2035 goal as quite challenging,” Nomura’s economists wrote in a Wednesday note.

In his explanation, Xi highlighted the key role of the new “dual circulation” strategy (双循环) which was unveiled in May and focuses on tapping the potential of the domestic market.

Production, distribution and consumption should be more dependent on the domestic market to create a virtuous circle (良性循环) for the national economy, Xi said, pointing out that “international circulation” is weakening due to changes in the global political and economic climate and the rising trend of deglobalization.

The proposal outlines measures to promote dual circulation including breaking industry monopolies and local protection, balancing the development of finance, real estate and the real economy, and increasing household consumption.

Policymakers and officials have previously emphasized that focusing more on domestic demand does not mean China will close its doors to the world. The proposal reinforces this message and says the country should make full use of both domestic and international markets and resources, promote the coordinated development of domestic and external demand, imports and exports, and foreign and domestic investment.

On the reform front, the proposal pledges that more changes are being planned to make industries such as energy, railways, telecommunication, and public utilities more market-oriented. It also promises to push ahead with the reform of factors of production (要素市场化改革) such as land, labor, capital, technology and data, plans that were first unveiled in April by the Central Committee and State Council, China’s cabinet.