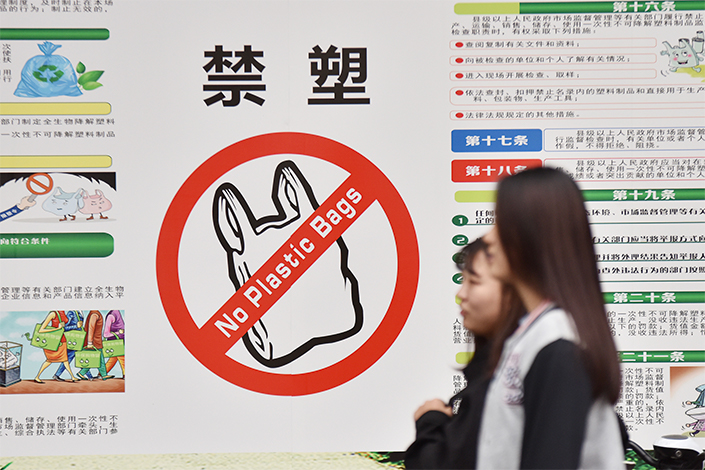 The island province of Hainan in southern China has launched a campaign to reduce plastic waste.

The world’s largest plastic user announced in January that it would ban some single-use plastics in major cities by the end of 2020, part of a push to dramatically reduce the amount of waste plastic it puts into the natural environment by 2025.

Those problems could slow the clampdown on traditional plastics, which can remain in the environment for many years, threatening wildlife and spreading toxic substances.

China produces around one-third of the world’s plastics. The country created around 63 million tons of plastic waste last year, only 30% of which was recycled, according to the China National Resources Recycling Association. The rest was taken to landfills, burned or abandoned.

The world’s No. 2 economy announced a ban on imported plastic waste in 2017. It has also banned retailers from handing out plastic bags for free and ordered manufacturers to stop making the ultra-thin variety.

But experts told Caixin that China’s plastic restrictions need further refinement in order to be effective. “I think it’s still early days for this policy,” said Wen Zongguo, a professor at the School of Environment at Tsinghua University in Beijing. “There are still a lot of policy details to come out in the future, and many issues that need to be addressed more quickly.”

The country’s standards for biodegradables have not been updated in 15 years and include materials that are not widely used or no longer meet internationally accepted definitions.

Additionally, China has no comprehensive system for recycling biodegradable plastics and lacks personnel who can distinguish them from traditional ones, said Wang Yonggang, the secretary general of the renewable plastics branch of the China Natural Resources Recycling Association.

As a result, both industry players and the general public lack a robust understanding of biodegradables, and “countless lies and specious arguments” plague the sector, said Wang Wang, the executive vice director of the plastic recycling committee at the China Synthetic Resin Association, an industry group.

Experts said China must pair the development of the biodegradables sector with better recycling mechanisms. “If we don’t build a proper system for recycling plastics, the problem will sooner or later come back to haunt us,” said Jiang Nanqing, the secretary general in charge of recycling at the All-China Environment Federation.

The two main biodegradable plastics used in China are PLA and PBAT. The former is a polymer made from plant sugar which degrades under industrial composting conditions, while the latter is a fossil-based material that degrades under both composting and natural conditions.

Both PLA and PBAT are more expensive to make than traditional plastics and carry additional recycling costs. These costs are usually passed on to downstream businesses and consumers, dampening demand for biodegradable products.

China’s southern province of Hainan is a case in point. The island of 9 million people is something of a testing ground for progressive environmental policies and has more detailed regulations on biodegradable plastics than the rest of China. But its pivot away from traditional plastics is not going as smoothly as some would hope.

Shifting that consumption toward biodegradables is no easy task. The island’s largest supplier of biodegradable plastic bags is Zhongke Xinhui (Hainan) New Material Technology Co. Ltd., which currently has a production capacity of just 7,000 tons per year.

According to Gong Zhen, Zhongke’s deputy general manager, the company makes the bags mainly from PBAT, which it buys from four major domestic suppliers. Although it is possible to make the bags from PLA, China lacks the technical know-how needed to use one of its key raw materials and cannot challenge the global industry leader, U.S.-based NatureWorks LLC.

“Even if you have money, you can’t buy PLA at the moment,” said Gong, adding that Zhongke uses other materials, like plant fiber, in products like its environmentally friendly tableware.

But no matter which material he uses, the end product typically costs more than its traditional plastic equivalent. Several industry insiders Caixin spoke to for this story said companies with high plastic use, like express delivery services, takeout services and users of agricultural sheeting, worried that the higher costs of biodegradables will make their business models unsustainable.

“The cost and price of biodegradable products are currently two to three times those of ordinary products,” said Ji Junhui, the director of the Hainan Province Biodegradable Technology Innovation Center. “Just from a price perspective, we can’t rely solely on the environmental consciousness of consumers.”

Hainan’s disposal mechanisms for biodegradables also leave much to be desired.

The province’s patchy collection, composting and recycling systems mean that it still processes many biodegradable products like other forms of waste. “Once household garbage is classified, some of it is comprehensively utilized, and some is incinerated,” said Chen, of the provincial environment bureau. “But there is currently no separate disposal method for plastic products.”

Hainan also lacks a composting and recycling system for biodegradables, although one is in the planning stage, said Wang Xiuhao, an official focusing on biodegradable plastics at Hainan’s industry and information technology bureau. Currently, only one Chinese company is known to have attempted such a project on an industrial scale.

He estimated that the country will need to produce between 5 million and 6 million tons of biodegradable plastic per year to support such a ban, far more than China’s current production capacity of 400,000 tons, according to a Hainan policy document.

Ji said he expected the government to issue new standards in due course. “If these requirements don’t come out, (Hainan’s) plastics ban is effectively waste paper,” he said.

Others remain bullish. As long as China enacts policies to manage the aforementioned issues and cultivate the market, downstream demand for biodegradables could spur the development of upstream industries, said Wang Xiuhao.

For now, Hainan should focus on collecting as much biodegradable plastic as possible and providing the conditions for decomposition, Chen said.

“The vast majority of the public, industry, specialists, government departments, cities, counties and third-party environmental charities supported the work plan,” he said. “There are obviously different voices in this debate, but we must still follow the choices of the majority.”