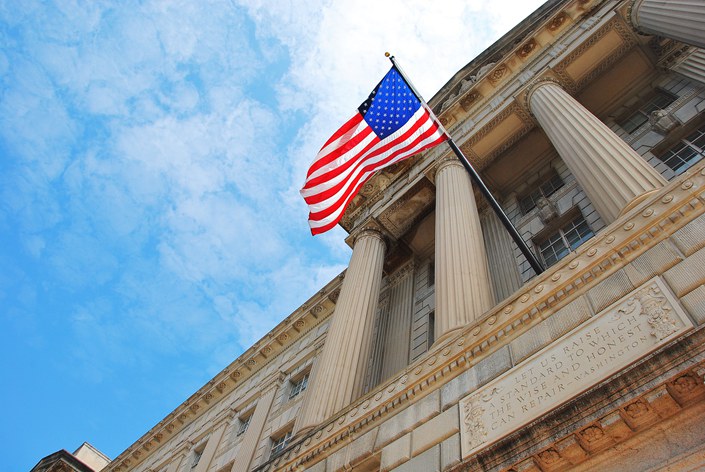 The U.S. Department of Commerce headquarters in Washington D.C. on April 7.

U.S. electronic-components maker TTI Electronics has denied selling to the Chinese military, days after another peer issued a similar denial, as the outgoing administration of U.S. President Donald Trump ratchets up its campaign to curb China’s tech aspirations during its final weeks.

TTI issued its denial as the U.S. prepares a list of companies from both China and Russia that Washington considers “military end users,” Reuters reported late last month. The draft list includes 89 Chinese and 28 Russian entities, and would require any American company to obtain a special government license before selling to those entities, the report said.

The statement issued by TTI, which is backed by billionaire investor Warren Buffett’s Berkshire Hathaway, made reference to the new list being compiled by the U.S. Commerce Department’s Bureau of Industry and Security (BIS). It said one of its own subsidiaries, TTI Electronics Asia PTE Hong Kong Ltd., was included on the list as a U.S. company that had sold goods to military end users.

TTI went on to reassure its customers, suppliers and other business partners that it and its units “have been and will continue to be fully compliant with all applicable laws and regulations, and that (it) will take all appropriate and available steps to demonstrate to BIS that TTI Hong Kong should not be included on the new military end-user list.”

TTI’s denial came just days after another American electronic components seller, Arrow Electronics Inc., revealed that one of its Asian units was also included on the new draft list. Arrow said it was in talks with the U.S. government about the military end-user designation toward Arrow Asia Pac Ltd., and that the unit doesn’t engage in military activities.

“We have been in contact with the Bureau of Industry and Security concerning the draft rule, and BIS has assured us that any the final list will be vetted carefully prior to publication in the Federal Register,” Arrow said in its earlier statement. “Given the foregoing, we are confident that Arrow Asia Pac Ltd. will not be listed as a military end user, when BIS publishes the final rule.”

The creation of the list is part of a recent flurry of activity by the Trump administration aimed at stymying China’s tech aspirations during its final weeks in office before President-elect Joe Biden takes office.

Earlier this week, Washington added state-run China National Electronic Import-Export Co. to a growing blacklist of Chinese firms banned from buying American products, citing the company’s ties to a Venezuelan government that has been at loggerheads with Washington for years. That addition means Washington has now blacklisted about three dozen such Chinese firms, mostly giving the reason that such firms could threaten U.S. national security.

One of the first firms put on that list was telecoms giant Huawei Technologies, which was first blacklisted last May. Since then, however, the U.S. Commerce Department has gradually granted many of Huawei’s U.S. suppliers such as Qualcomm and Intel licenses to resume selling products to the Chinese company, though mostly for older 4G technology.

Bloomberg contributed to this report