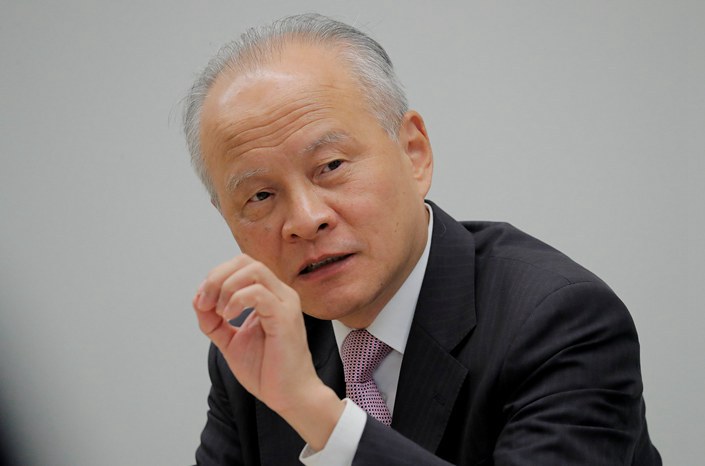 What’s new: Chinese Ambassador to the U.S. Cui Tiankai has said that China is willing to show goodwill in reversing worsening relations if the U.S. is willing to reciprocate.

During an online discussion Thursday, Cui was asked by Steven Orlins, president of the National Committee on United States-China Relations, whether China was prepared to reopen the American consulate in Chengdu and invite expelled American journalists back to China.

In response, Cui hinted that China was willing to consider both proposals, saying that “if the US government is ready to reverse the course, we are ready to look at it.”

Beijing closed the U.S. consulate in the southwestern city of Chengdu in July, having expelled American journalists from three major U.S. newspapers in March, in what it deemed was retaliation for Washington’s closing of the Chinese consulate in Houston and scaling down the presence of Chinese journalists in the U.S.

What’s more: Cui, Washington’s longest-serving Chinese ambassador, also said that “In order to put the relations on the right track, to have real improvement of the relations, both sides have to proceed with goodwill and good faith.”

“I don’t think that China should just do something to please anybody here ... So it’s kind of good faith for good faith, goodwill for goodwill," he added.

Some U.S. experts on China, including Orlins, have suggested on multiple occasions since former U.S. Vice President Joe Biden’s win in the presidential election that China could unilaterally make moves in advance, such as reopening the American consulate in Chengdu, in a show of good faith.