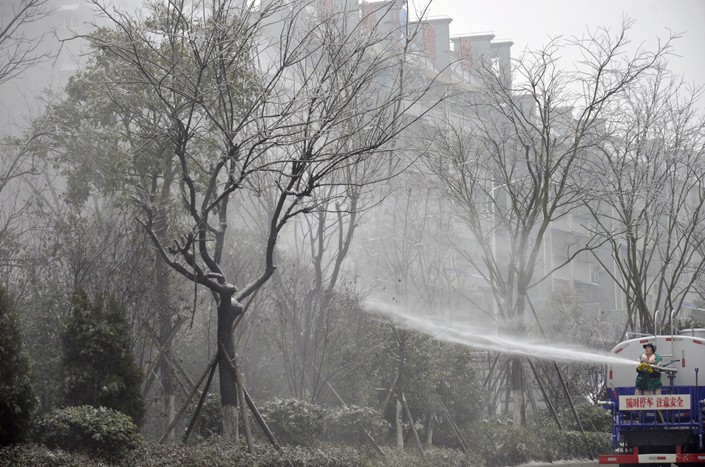 China has recorded its first ever commercial transfer of the rights to use captured rainwater, marking an important step in the country’s efforts to create water-storing “sponge cities.”

The deal, which took place Monday in the central city of Changsha, saw a rainwater usage company buy the rights from a local property conglomerate and sell them to an urban landscaping firm.

The deal “marks our country’s entry into the practical stage of the marketization of ecological pricing for rainwater and other nonstandard water resources,” said a notice (link in Chinese) on the website of the China Water Exchange, the national water rights trading platform.

In accordance with a 2015 national guideline, some 30 cities in China are piloting projects that capture rainfall and either put it to commercial use or slow its release back into the environment. Such techniques can help mitigate floods and extreme weather events.

Local governments in China are increasingly collaborating with private companies on the projects, according to state news agency Xinhua.

The firm purchased 4,000 cubic meters of water captured by another company, Hunan Gaoxin Real Estate Co. Ltd., at a price of 0.7 yuan ($0.11) per cubic meter, putting the total value of the transaction at 2,800 yuan, according to the notice.

Yu Chuang then transferred the water to a subsidiary of Changsha Gaoxin Holding Group Co. Ltd. for 3.85 yuan per cubic meter, 20% cheaper than the local water price, the notice said, adding that the water would be used for “landscaping and environmental and sanitation works.”

Yu Chuang director Zeng Fu’an told Caixin that authorities in Changsha had built rainwater collection ponds with a total capacity of nearly 70,000 cubic meters since the launch of the sponge cities initiative.

The ponds can be emptied about 10 times per year, Zeng said.

The concept of sponge cities returned to the spotlight in China in the wake of this summer’s devastating floods.

But critics say the programs carry high costs and have limited influence on flood mitigation. “The sum of those things will still not be able to prevent severe floods,” said David Shankman, a professor emeritus at the University of Alabama and an expert on flooding in China, during an interview with Caixin earlier this year.