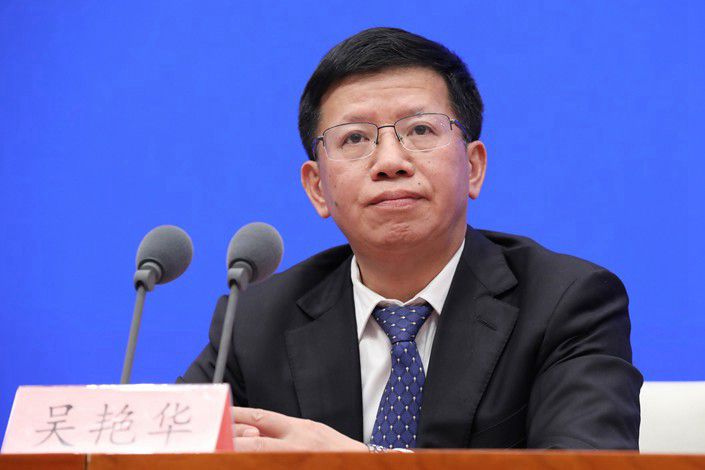 Wu Yanhua, a vice administrator of the China National Space Administration, speaks Thursday about the Chang’e-5 mission at a press conference in Beijing.

China is willing to share its lunar samples and data with the global scientific community including the United States, as it seeks to downplay legal roadblocks to collaboration between the two nations, a senior Chinese space agency official said.

Wu Yanhua, a vice administrator of the China National Space Administration (CNSA), told reporters at a press conference on Thursday that the Chinese government is willing to work with international institutions and scientists and share the lunar samples and relevant detection data collected by the Chang’e 5 moon probe, which returned to earth this week.

However, Wu emphasized that collaboration with the National Aeronautics and Space Administration (NASA) will depend on whether the United States lifts its ban on bilateral cooperation.

Since 2011, U.S. Congress has banned NASA from engaging in bilateral agreements with China and having its scientists directly collaborate as Washington seeks to protect its aerospace technology and to punish China for its human rights record.

The CNSA vice administrator said that space resources are humanity’s common resources, but “unfortunately” the potential cooperation “mainly depends on the U.S. policy,” due to the ban.

“We would like to have mutual cooperation with the U.S. engineers and scientists on an equal and reciprocal basis,” Wu said.

Nonetheless, there is precedent for the two sides working together under the current restrictions. In 2019, after receiving congressional approval, NASA collaborated with China to monitor the Chang’e 4 moon lander and Yutu 2 rover on the far side of the moon using NASA’s lunar reconnaissance orbiter, according to a report by Scientific American.

Wu said that the two kilograms of samples retrieved from the moon will mostly be used for scientific research, but some will go to museums for educational displays. The remainder will be shared with foreign scientists in accordance with international conventions.

The lunar samples come from a volcanic formation on the moon called Mons Rumker, which is believed to have last been active 1.3 billion to 2 billion years ago. The material promises fresh insight into the moon’s evolving history because it is estimated to be billions of years younger than samples obtained by the United States and former Soviet Union during their space race of the 1960s and 1970s.

When asked if China has specific plans to send astronauts to the moon, Wu said China’s goals remain to break technology barriers and to focus on science research, and that the country was only eventually looking to land its astronauts on the moon.