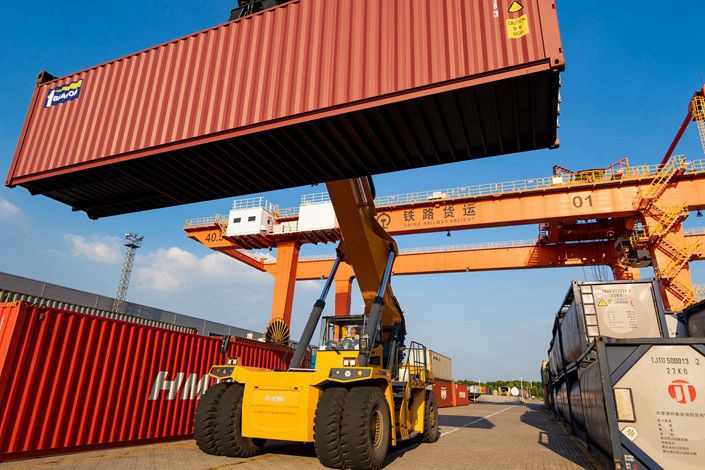 Such export strength may be thanks to recovery in activities in the U.S. and EU in the fall before the pandemic worsened more recently. PMI readings and labor market indicators suggested improvement in Q3 and early Q4 before slowing more recently. In addition, reduction in holiday travel and dining out might also have helped to divert consumer spending to goods, for use at home and for the holiday season.

In contrast, Canada and Mexico saw their market shares decline by 2 percentage points year-on-year and 1.6 percentage points, respectively in the U.S. and EU markets. These trends continued in the third quarter, though the difference in market share gains between China and other Asian economies narrowed, presumably as production resumption improved elsewhere in Asia. The divergence between China/East Asia and elsewhere may be partly due to better pandemic controls in Asian economies, and hence more supply chain resilience.

For example, in textile and apparel, China and Vietnam both increased their market shares in the U.S. and EU markets in the second and third quarters, while Bangladesh and India both lost some market share, reportedly due to production suspension in the latter countries.

Another factor for the relative market share changes may be the change in DM import structure. In 2020, as people stayed home more and travelled less, U.S. imports of fuel, vehicles, apparel (non-PPE) and footwear declined relative to total imports, while those of pharma, textiles and electric machinery increased. China and East Asia economies tend to be bigger exporters of the latter, and not for fuels and vehicles.

Global demand may weaken in the near term considering softer U.S. ISM and Eurozone PMI indicators in the face of a worsening pandemic situation and renewed tightening of mobility restrictions. This may mean weaker exports in the next couple of months.

However, for 2021 as a whole, UBS expects global GDP growth to rebound to about 6% from an almost 4% decline this year, and see global industrial production rebounding from -5.8% to 6.2% in 2021. We thus expect global demand would also rise sharply overall next year as some pent-up demand is released and as activities and labor markets improve.

Work resumption in other economies may limit the upside of China’s export rebound. In recent months, exports of other emerging markets, especially emerging Asia excluding China, have recovered rapidly thanks to gradual activity normalization. For instance, Vietnam’s export growth picked up to 10% to 11% year-on-year in the July to November period, as did Taiwan’s (6% in the second quarter and 10% from October to November).

Going forward, with the help of vaccines, we expect increased work resumption in developed and emerging economies alike (for example textile and apparel industry in India and Bangladesh), which will likely create more competition for China’s exports and cap the rebound. That said, vaccine distribution is likely to be gradual, especially in emerging markets, and demand in developed markets may pick up faster than supply competition in emerging markets in the course of 2021.

Looking ahead, as the global pandemic is contained in 2021, especially in the U.S. and EU, demand for face masks and protective gear are likely to fall, and that for some small home appliances and electronics may weaken. In addition, as travel, dining out and related services spending recovers, consumers may reduce their expenditure allocated to goods — this may be especially true in the U.S., where UBS economics expect a modest decline in consumer spending on goods and a significant increase in services. Such a change would also likely weaken Chinese exports to the U.S. in 2021.

Further yuan appreciation may also start to hurt exports in 2021. The yuan has appreciated notably since end May 2020, rising by 8.4% against the dollar and 3.6% against the CFETS basket. However, the appreciation has been more modest since the beginning of the year, and export orders have been stronger than expected partly due to production disruptions elsewhere.

In 2021, we expect the yuan to face further appreciation pressures against a weaker dollar. Our forecast is for the yuan trading at around 6.4 per dollar at end 2021 as China eases capital outflows, but the yuan may appreciate more in the course of the year. The strength of the yuan may bring some negative effect on China’s exports, especially if other competitor currencies do not appreciate as much against the dollar.

We predict strong export growth but no market share gain in 2021. We think the expected sharp rebound in general consumer goods globally and an upcycle of tech sector should more than offset the headwinds from improved work resumption elsewhere and a downturn in demand for protective gear and stay at home products.

As projected earlier, we expect China’s merchandise exports to rebound to 11% to 12% in 2021, though it will unlikely be the best export performer globally. China’s exports growth may be exceptionally strong in the first quarter of next year thanks to a low base, and slow to low-to-mid single digit in the second half.

The downside of our baseline forecast mainly comes from a weaker than expected global demand rebound, a much sharper drop in pandemic related products, a faster production resumption elsewhere, and a significant shift of developed market spending away from goods towards services. While we expect China’s export growth to recover to 9% in real terms next year, the risk is more on the downside, especially given the recent export strength.