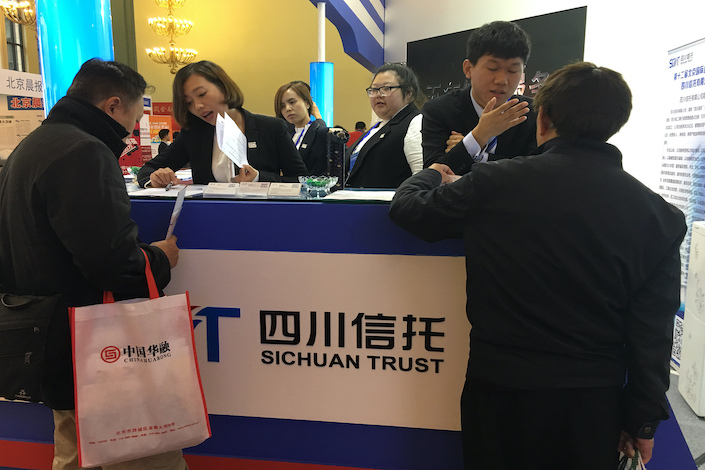 Regulators took control of Sichuan Trust Co. Ltd. after the local trust company failed to deliver a satisfactory resolution of a $3.6 billion investment repayment crisis that has dragged on since May.

The Sichuan branch of the China Banking and Insurance Regulatory Commission (CBIRC) sent a working team jointly formed with the local government to supervise the operations of Sichuan Trust in southwest China’s Sichuan province and carry out a management reshuffle, the CBIRC branch said Tuesday

The working team will hire a professional institution to guide the trust’s business operation and take measures to prevent the credit crisis from spreading, the regulator said. Regulators would press the company to reshuffle its board members.

The CBIRC said it would limit the rights of four of Sichuan Trust’s shareholders that together own 66.6% of the company. The four shareholders — Sichuan Hongda Co. Ltd. and its parent Hongda Group, Sichuan Haoji Food Co. Ltd. and Huiyuan Group — were barred from exercising their rights starting Tuesday, the regulator said. Hongda Group, controlled by businessman Liu Canglong, is the largest shareholder with 34.4% of Sichuan Trust.

Sichuan Trust failed to repay principal and interest on a trust product in May, triggering a wave of protests by investors and putting the company’s credit crisis in the spotlight. At stake is the repayment of about 25 billion yuan that investors put into Sichuan Trust’s “trust of trusts” investments, which buy into other trust products that have invested in a wide variety of assets, including bonds, stocks and loans to private companies, and local government financing vehicles. More than 8,000 individual investors were affected.

Sichuan Trust’s management pledged to raise funds to repay investors by issuing new shares to existing and new investors and by making asset sales. But little progress was made.

In July, banking regulators in Sichuan took enforcement measures against Sichuan Trust citing the company violated industry rules regarding connected-party transactions, risk management and internal controls, putting investors’ interests at risk. Regulators ordered Sichuan Trust to suspend repayment of some trust products while working on a plan to resolve the problem and waiting for the company’s audit results.

In a Tuesday statement, the Sichuan branch of the CBIRC said Sichuan Trust violated the rule of prudent operation and "misused part of its loans and trust investment funds on relevant shareholders and their related parties.” Shareholders who misused the company’s funds refused to return the money despite regulators’ order, affecting the company’s operation and hurting investors’ interests, the regulatory body said.

The regulator promised to pursue embezzled funds and punish people involved in the violations. Sources told Caixin that the regulator froze all personnel moves in the company amid an investigation.