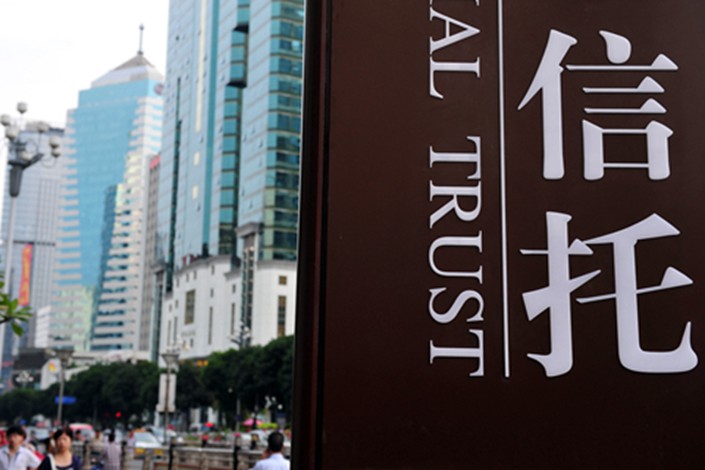 Embattled Sichuan Trust Co. Ltd., which failed to repay over 20 billion yuan ($2.9 billion) to investors, has said it is trying to repay the debt within a year by selling its underlying assets.

The firm, which has been on regulators’ radar for more than two years due to concerns about risky business practices, failed to repay the principal and interest on a trust product that matured in May. That triggered a wave of protests by investors outside the company’s headquarters in Chengdu, capital of the southwestern province of Sichuan. The protesting investors were able to meet with several of the privately owned firm’s top brass, including Chairman Mou Yue and President Liu Jingfeng, who said at the time that the company would do whatever it takes to solve the problem within one year, according to a video of the meeting seen by Caixin.

Sichuan Trust said much the same thing last week in another meeting with regulators and investors over its “trust of trust” (TOT) products, which take investors’ money to buy other trust products that have invested in a wide variety of assets including bonds, stocks and loans to private companies and local government financing vehicles. Executives disclosed at the meeting that four of its shareholders refused to invest more in the firm, according to a statement (link in Chinese) released Wednesday. It also pledged to sell its underlying assets within a year to repay the debt and agreed to sell its Chuanxin office building and the firm’s stake in Hongxin Securities Co. Ltd. Work to evaluate and sell those assets is already under way, it said in the statement.

However, such assets could probably only bring in some 5 billion yuan, paling in comparison to the firm’s massive debt hole, an industry source said. “The fact that several existing shareholders did not want to pour more money in reflects how big a problem (the firm faces),” the source said.

Sichuan Trust is just the latest such firm to run into trouble in a sector already reeling from the effects of a crackdown on shadow banking and economic slowdown amid the coronavirus pandemic. In May, the company denied rumors that its capital pooling business had been frozen and it would be taken over by regulators.

Sichuan Trust has employed KPMG for auditing work, and the results will likely come out at the end of this month, when local regulators and the firm will be able to come up with a further plan to deal with the risks, the firm said in a recent meeting with investors.

Sun Tianqi, head of the People’s Bank of China’s financial stability bureau, said at a Friday briefing (link in Chinese) that regulators and local governments are studying how to deal with the risks that Sichuan Trust and Anxin Trust Co. Ltd. have exposed and that the central bank is working closely with them.

Sun said that investors need to develop better awareness of the relationship between earnings and risk, and that regulators should prevent moral hazard when dealing with products involved in the cases.