By Jia Tianqiong and Anniek Bao 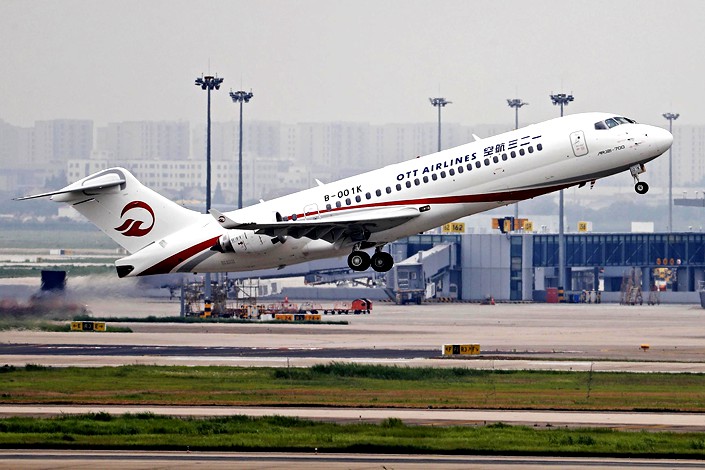 Short for One Two Three, OTT Airlines flew from Shanghai to Beijing for its maiden passenger flight on Monday.

OTT Airlines, a wholly owned subsidiary of China Eastern Airlines Corp. Ltd., completed its maiden passenger flight on Monday with a Chinese-made ARJ21 as part of its plan to utilize domestically built planes, bolstering the nation’s main commercial aircraft-maker as it seeks to challenge international behemoths such as Airbus SE and Boeing Co.

Short for One Two Three, OTT Airlines flew from Shanghai Hongqiao International Airport to Beijing Capital International Airport, according to a statement on China Eastern’s website, with the majority of flights to eventually be operated with planes like the ARJ21 and the C919. Both of these planes are made by state-run Commercial Aircraft Corp of China (COMAC), with China Eastern adding that it expects to scale up operation of these planes by 2030.

The debut flight comes as China seeks to leverage the nation’s vast air route network and massive domestic market to get a slice of the lucrative global industry for commercial aircraft. That industry is currently dominated by Boeing and Airbus, who manufacture the largest planes, while Canada’s Bombardier and Brazil’s Embraer are major producers of smaller planes that would compete with the ARJ21.

The company initially plans to purchase three ARJ21-700 jets, six in 2021 and eight in 2022, eventually expanding the fleet to 35 aircraft by 2025, the statement said. The ARJ21 commercial jet, which has 90 seats, is the first regional aircraft that was wholly designed and manufactured in China. The model conducted its first domestic flight in 2016 and made its first test flight on an international air route two years later.

The narrow-body C919 passenger jet completed its final test flights before commercial delivery earlier this month, according to a senior official at China’s Civil Aviation Administration. The regulator will evaluate the plane’s safety performance under different flight conditions to decide whether it can be approved for commercial roll-out. However, the CAAC hasn’t yet provided a timetable for when it might begin commercial operation.

COMAC has so far delivered 42 ARJ21 aircraft, which operate on 55 routes nationwide with a record of carrying over 900,000 passengers. It has also received more than 800 orders for the C919 from domestic and foreign customers, according to local media reports.

Launched in February, OTT was formerly engaged in medical transportation, corporate flights and offering pilot training programs for private and commercial jets. It got the green light from the civil aviation authority to operate as a passenger airline earlier this month. Besides services between Shanghai and Beijing, OTT also plans to carry passengers between regional centers including Wenzhou and Nanchang, it said.

China’s ambition to challenge the much bigger rivals Boeing and Airbus could be jeopardized by the “military end users” sanctions list released by the U.S. government earlier this month, which restricts 58 Chinese companies with alleged military ties from buying a wide range of U.S. goods and technology. Among them, Shanghai Aircraft Design and Research Institute designs planes for COMAC and Shanghai Aircraft Manufacturing Co. Ltd. manufactures COMAC planes.

Production of both the ARJ21 and C919 have relied on foreign suppliers for parts to build the braking system, engines and hydraulic pressure components. Chinese manufacturers have been able to make the less essential components, according to industry observers, but they are seen as likely to require more maintenance and incur additional costs.

OTT Airlines has recruited more than a dozen pilots to fly the ARJ21, 28 flight attendants, nine onboard security staff and more than 30 engineers.