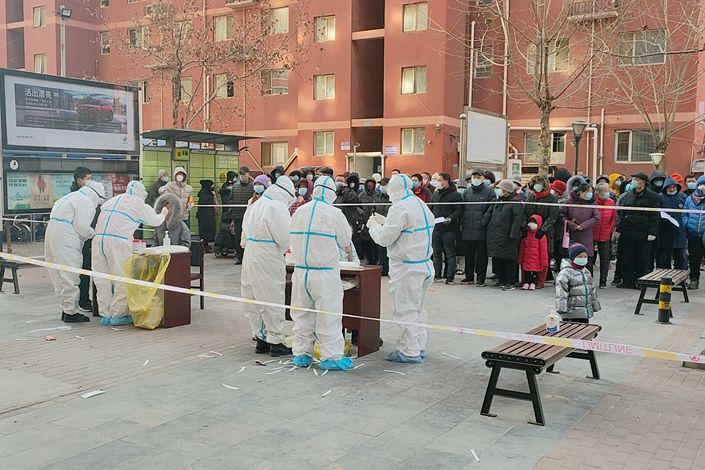 Hebei province, which surrounds the Chinese capital, has entered “wartime mode” to curb the spread of the novel coronavirus after the northern region reported 117 cases in four days.

Shijiazhuang (石家庄), the provincial capital, reported 19 new confirmed cases on Wednesday, bringing the province’s total to 39 since Jan. 2. According to the local health authorities, one of the new patients had recently attended three weddings.

A village in the city’s Gaocheng district became the country’s only designated Covid-19 high-risk area after reporting eight confirmed cases on Tuesday. Xingtai, a city directly to the south, had reported six confirmed cases as of Tuesday, while the province as a whole had reported a total of 78 asymptomatic patients.

The surge in the province comes as scattered cases and local outbreaks have emerged across the nation in recent weeks, from Southwest China’s Chengdu to the northeastern port city of Dalian.

Health officials said Shijiazhuang would test its entire 11 million population and that people would be barred from entering residential communities other than their own.

The city has also suspended in-person classes for kindergartens and schools. Students at the city’s Hebei University will also leave campus ahead of the scheduled Lunar New Year break.

The city’s long-distance bus station has suspended operations, officials announced Wednesday. More than 30 flights to Shijiazhuang Zhengding International Airport were cancelled, and cars were banned from leaving or entering the city.

The Beijing municipal government asked people who have been in Shijiazhuang or Xingtai since Dec. 10 to report to their communities and companies and follow epidemic control measures.

Teams of experts from the National Health Commission (NHC) and the Chinese Center for Disease Control and Prevention (China CDC) have been sent to Shijiazhuang to guide and assist local disease control efforts.

Ma Xiaowei, director of the NHC, who arrived in Hebei on Tuesday, urged the city to finish the mass testing within four days, cut the chain of transmission and contain the spread of the disease.

Feng Zijian, deputy director of China CDC, said during an interview with national broadcaster CCTV on Tuesday that the large number of infections indicated that transmission had been ongoing for a while.

Feng said the virus strain found in the Hebei was probably imported from Europe. He also said that the outbreaks in Shijiazhuang and Xingtai could be caused by the same strain.