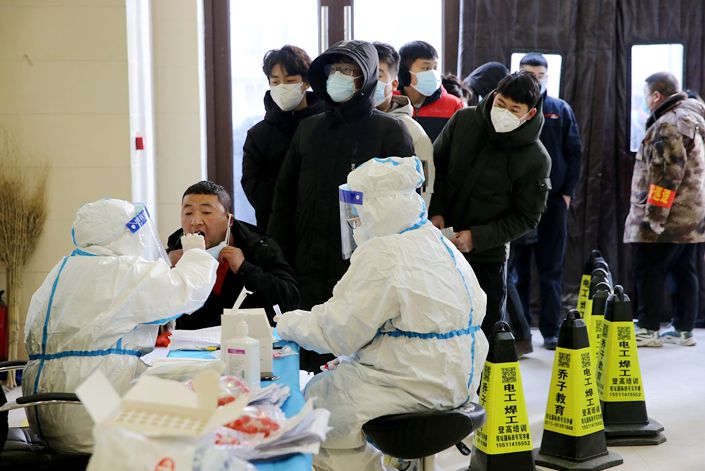 Among the new positive cases, 50 were discovered in the province’s capital city Shijiazhuang whose Gaocheng district is the country’s only Covid-19 high-risk area. The province also reported 69 asymptomatic patients.

The province, which surrounds the nation’s capital, further tightened prevention and control measures to block the potential spread of the disease.

Shijiazhuang has mobilized some 3,000 medical workers to support the mass testing of its entire 11 million population within four days. As of Wednesday afternoon, about 2 million samples had been collected.

Hebei’s civil affairs department issued a notice on Tuesday urging people to narrow the size of gatherings, such as weddings or funerals, during and after the upcoming Lunar New Year period to prevent Covid-19 infections. Contact tracing showed that many recent locally transmitted cases in Hebei emerged in rural areas and were related to events such as weddings.

Three local Shijiazhuang officials have been punished for their failure to contain the spread of the disease. They include a deputy head of the Gaocheng government, deputy director of the district’s emergency response unit, and an official in the village of Liujiazuo which recorded dozens of patients, according to a statement (link in Chinese) released by the city’s Communist Party discipline body.

The surge of Covid-19 in Hebei comes as the nation has reported scattered cases and local outbreaks in recent weeks, from Southwest China’s Chengdu to the northeastern port city of Dalian, which have rekindled health concerns across the country.

The outbreak was still developing, and Hebei was facing a serious situation to get it under control, Ma Xiaowei, director of the National Health Commission (NHC) said on Wednesday at a meeting with provincial officials.

Ma was among other experts from the NHC and the Chinese Center for Disease Control and Prevention sent to Hebei by Vice Premier Sun Chunlan to guide and assist local disease control.