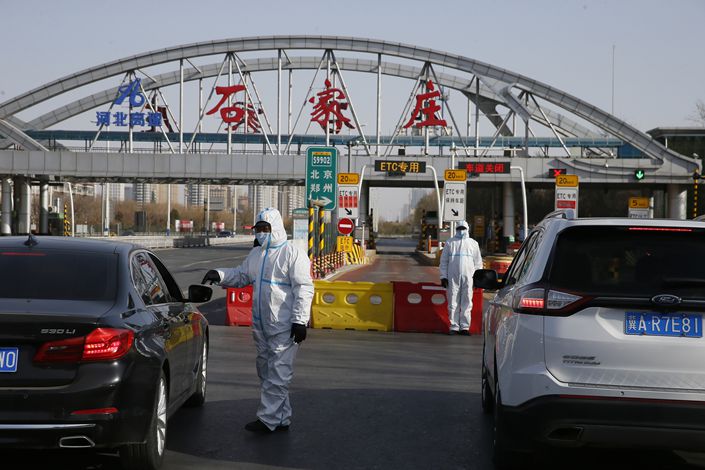 The ongoing coronavirus outbreak in Hebei province is disrupting logistics and travel across northern China, as the authorities erect checkpoints and block interprovincial transport.

At least six cities in Shanxi province, which sits on the western Hebei border, have set up checkpoints alongside highway toll stations as of Thursday. Staff manning the facilities collect information about drivers and vehicles that either have Hebei license plates or that have recently passed through the province, before turning them back.

Several Hebei-based traders told Caixin that the restrictions have had a major impact on their ability to transport goods. One manager at a streetlight manufacturer said their trucks had been barred from entering Shanxi on Wednesday. To get around the restriction, they had rented trucks with Shanxi plates, the manager said.

Beijing, which is virtually surrounded by Hebei, also announced Wednesday that it would tighten controls over people and vehicles coming from its neighbor. Several highways, including interprovincial roads that pass through Hebei, have also been temporarily blocked to all travelers, according to road operator Hebei Expressway Group Ltd.

As of Thursday, the coronavirus cluster that emerged this in Hebei month had swelled to 123 symptomatic cases, including 33 reported that day, in addition to 181 asymptomatic cases, according to the local health administration. Thirty-one of the new symptomatic cases were in the capital Shijiazhuang, which has been placed under lockdown with people and vehicles banned from leaving.

A driver from Shijiazhuang tested positive for the coronavirus in Northwest China’s Xinjiang Uygur autonomous region on Wednesday. “Vehicles from Hebei and Beijing would all be turned away from entering Xinjiang,” said a worker at a logistics firm. “Our shipping business has been affected (by the rule).”

Three of China’s four biggest logistics companies — SF Holding Co. Ltd., ZTO Express Co. Ltd., and Yunda Holding Co. Ltd. — have suspended deliveries in and out of Shijiazhuang. The fourth major player, STO Express Co. Ltd., has continued to make deliveries but said it had improved its sanitation of items and was testing all its workers. But delivery times will be longer due to the time needed to repeatedly sanitize goods, as well as the traffic controls, STO said.

Coal supplies will be particularly affected by the road transport restrictions, which may impact total supply in the province amid an unusually cold winter. A metal industry insider said several coal mines in neighboring Inner Mongolia have banned vehicles from Shijiazhuang from entering, as have mines in the northwestern province of Shaanxi.