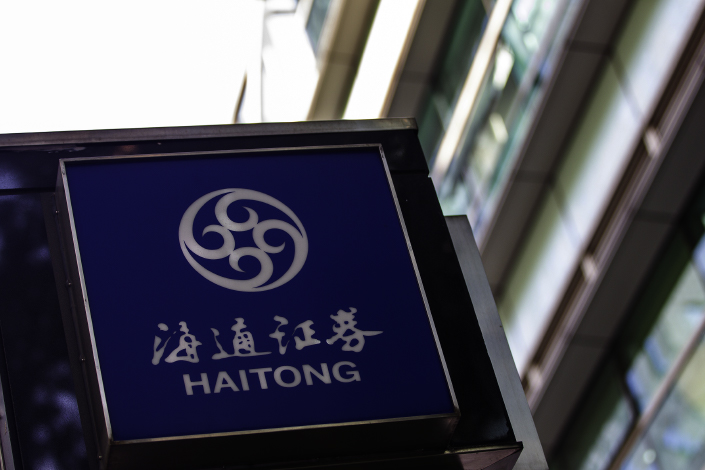 A Haitong Securities branch in Shanghai on March 17.

Several financial institutions that facilitated the shady bond issuances of state-owned Yongcheng Coal and Electricity Holding Group Co. Ltd. — that later defaulted and caused a bond market earthquake — have been told by a bond market regulator to rectify their rule-breaking behavior.

The National Association of Financial Market Institutional Investors (NAFMII), a self-regulatory body under the central bank, has sent warnings (link in Chinese) to Haitong Securities Co. Ltd., two of its subsidiaries, and Donghai Fund Management Co. Ltd., asking them to conduct rectification.

NAFMII said that these firms were found to have broken the rules when they underwrote bond issuances. Haitong Securities ordered its subsidiaries to help the related issuer buy a portion of its own offerings, the regulator said. Caixin has previously learned from knowledgeable sources that the related issuer in this case was Yongcheng Coal, and the purpose of such a practice was to inflate its borrowing sizes and create a better image to attract bond investors. The brokerage also helped the issuer trade the bonds it issued, the regulator said.

The bond market regulator said that these firms need to fix the issues exposed by the investigations. It has sent the cases to the People’s Bank of China and the China Securities Regulatory Commission, which will then likely issue penalties to the companies.

The probes revealed that Haitong Securities and its subsidiaries offered one-stop structured bond issuance services, a shady practice that also used Donghai’s fund accounts. “It’s obvious that Haitong failed to carry out a sound internal risk isolation mechanism,” a bond industry source previously said, adding that it’s surprising that such a big brokerage allowed such a conflict of interest.

The Chinese mainland’s sixth-largest securities company by assets, Haitong’s behavior was brought to light after Yongcheng’s abrupt default on a 1 billion yuan ($154 million) bond in November, which then set off a chain reaction affecting other debt issuers, particularly state-owned enterprises (SOEs).

Shanghai-listed Haitong Securities has been a major underwriter of SOE bonds. In November, NAFMII put it under investigation for its role in the issuance of Yongcheng’s bonds.

In December, the central bank and other financial regulators pledged to deepen reforms in the bond market and strengthen law enforcement as the market faces a wave of defaults.

It’s not just Haitong that’s been in trouble over the Yongcheng case. In December, China Chengxin International Credit Rating Co. Ltd. was banned from rating new interbank bonds for three months over its misconduct in rating Yongcheng, to which China Chengxin gave its highest AAA rating just a month before the default.